A stock pen for East Shumala

One of the switching locations planned for my layout extension to East Shumala (see map at: http://modelingthesp.blogspot.com/2014/10/my-column-on-timetable-construction.html ) is a stock pen. As late as the 1950s, many local stock pens were owned and operated by railroads, and SP was no exception. There were numerous such pens (which SP called “stock corrals”) along SP lines throughout the west. That’s what I want to model.
Before I get into my modeling plans, I should mention two excellent sources of information about livestock and associated industries (meat packing, etc.). Both are by Kalmbach’s Jeff Wilson. The older book, the first volume in the series, The Model Railroader’s Guide to Industries Along the Tracks (2004), covers the livestock businesses in an 11-page Chapter 6. A more recent book takes up that same subject in a book-length treatment, Livestock and Meatpacking (2013). Shown below are the covers of the two books. 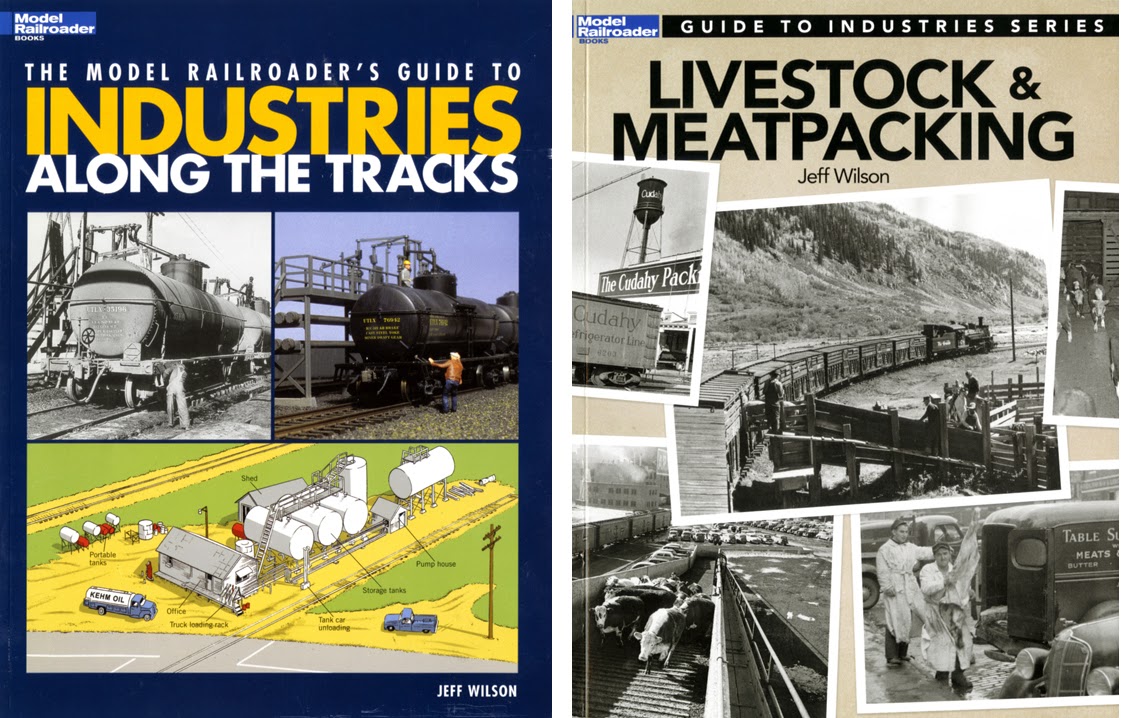 Incidentally, if you have the 2013 book, no need to get the earlier one for its brief treatment. The newer book is really a huge expansion of the older chapter. But if you only have the older book, you have a good summary in Chapter 6.
In addition to a whole bunch of historically very interesting photos, author Wilson has also provided in the 2013 book data on stock shipping, an account of how livestock waybilling was done, and diagrams of the layout of stock pens. The latter drawings are a helpful re-publication of material in an article from Paul Chilcoine in Model Railroader for April 1983.
There is an interesting Santa Fe photo, one I’ve seen elsewhere, reproduced in the 2013 Wilson book, which helpfully shows a really small stock pen, the kind of size most modelers are compelled to build for space reasons, and that applies to me, too. It had just two pens and one loading chute, and was located at Milan, Kansas. 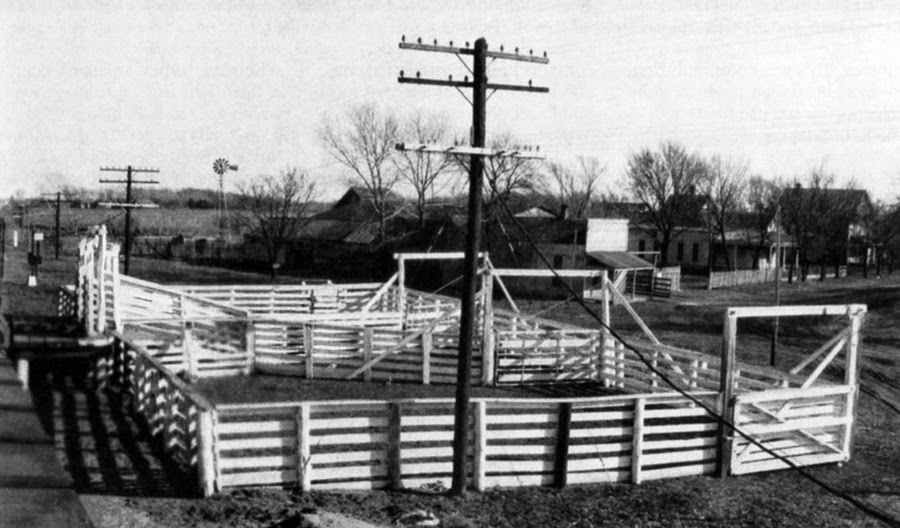 The pen appears to have been whitewashed, though most stock pens show at most the vestiges of such beautification.
Over the years, there have been many kits for stock pens, at least in HO scale. In stripwood, Timberline had a nice one, and the Campbell Scale Models one is still available (kit no. 400). Plastic versions from A.H.M., Tyco, and Bachmann were all for rather small pens, but today Walthers has one (their number 933-3047) which is for a larger facility. Of course any of these could be built smaller, or, if two or more kits were combined, larger. Some of them err in having fences not planked on both sides, where animals would walk on both sides of a fence line, but of course this is easy to remedy.
I have the remnants of an AHM stock pen, and will enlarge it as needed to fit my space. In addition to the pens, there should be an office, a shed or small barn to hold hay (both for animal feed and for bedding in stock cars), and maybe some indication of water supply. Local stockyards sometimes had scales, to weigh incoming animals, but not always, and I don’t plan to include that.
The AHM kit was intended to build a two-pen arrangement. I will add a third pen of the same size (they are about 15 x 25 scale feet), smaller than most real pens (for example, 40 x 40 feet, or 25 x 40 feet). Once again, modeling leads to compression of reality! I will also add planking to the sides of the fencing in the kit where it should be double-sided. In this kit, the posts are about 2 x 6 scale inches and the horizontal boards are 2 x 8 inches, dimensions consistent with lumber sizes shown in Wilson’s book (above).
Both these sizes are available as Evergreen styrene strip, which I am using for the additional fencing. As I mentioned above, the additions will be the third pen, along with double-siding the fence elements dividing pens. I have a small building left over from another kit which can become the office. I am leaning toward building an enclosed water tank also.
Obviously an important part of a rail-served stock pen is the stock cars which are operated. I have described my roster plan for stock cars in an earlier post, at: http://modelingthesp.blogspot.com/2011/02/choosing-model-car-fleet-3.html . I plan to use a mix of foreign-road and SP / T&NO stock cars, with the latter predominating. I will say more about stock cars when I show the completed pens in a future post.
Tony Thompson
Posted by Tony Thompson at 10:33 AM