Several of the industries on my layout either load or unload tank cars. For petroleum products, unloading was normally done by gravity from a bottom outlet (at least in California, though I understand some states banned gravity unloading). This can be indicated on a model in several ways. A hose or hoses can be artfully draped alongside the spur track; a coiled hose can be shown on a rack; or the modeler can show just a covered box where hose connections are made, with coiled hoses assumed inside the pump house. I have done all three in different places.
Here is a prototype photo of bottom unloading in progress. It was included in my column in the March 2014 issue of Model Railroad Hobbyist (back issues are always free to download at: http://model-railroad-hobbyist.com/ ). It is a Standard Oil Company photo, taken at Bayway, New Jersey, and is from the Rob Evans collection. 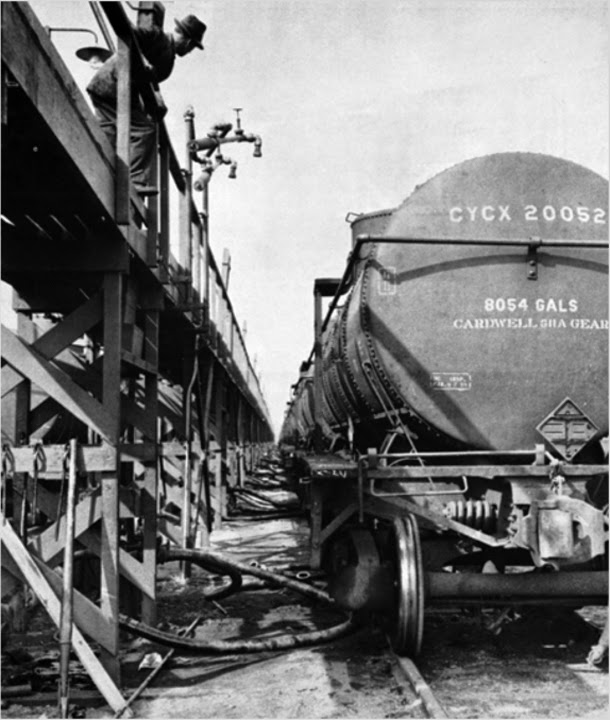 Note that there is a loading platform above, which relates to my subject now.
This post is about the situation where workmen need to connect unloading pipes or hoses at the car top (for example with pressurized gas cars, such as LPG or chlorine), or where the cargo is an ordinary liquid but is unloaded by pumping out the car through the dome (for example acids), or where a car is to be loaded through the dome’s manway (in my case, bulk wine at the winery). This next photo, a detail of one in my March 2014 MRH column, shows an unloading platform for propane, and on the ground to its right, you can see a coiled hose and a hose connection for bottom unloading. You can click on the image to enlarge.

The propane tank is behind the platform, and the pump house to the right.
I described the scratchbuilding of this platform in the MRH column, but just to show it clearly, here is the complete model with primer paint. 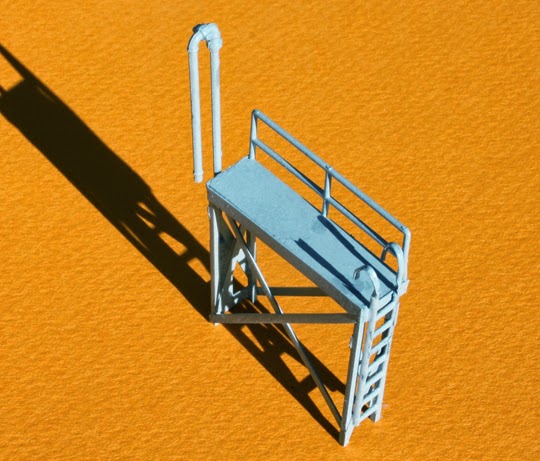 Many platforms like this, which were in regular use, had stairways rather than ladders, but platforms that were only used occasionally sometimes did have ladders.
I need to build two platforms, one of which is for loading tank cars at my winery at Ballard. The second is for my chemical repackaging company, which needs a more complex top unloading facility, for pressurized gas cars as well as for top-unloading cars.
These two platform projects are kitbashed, or at least rearranged, from the Walthers “Oil Loading Platform” kit, their number 933-3104. I should emphasize that there is nothing profound about my modification of the Walthers kit, only that I thought it might be interesting to show ways it can be used other than the stock kit assembly. As Tony Koester says, in his excellent and inspiring book, How to Kitbash Structures (Kalmbach Books, 2012), “Do not read the label on the box.” That means, just see if the picture of the completed structure resembles, or can contribute to, what you want to build.
In my case, the Walthers kit is being transformed into two platforms, one for chemical unloading, the other for wine loading. The kit’s label, “Oil Loading Platform,” might make you think it was only for that use, but it needn’t be so; neither of my models will be used that way.
The kit is set up so tank cars can be loaded on both sides of the platform. But I have only a single track at both my industries, so I won’t use the double-sided feature of the Walthers platform. Moreover, the Walthers deck is molded to represent (poorly) steel grid, whereas in my modeling year of 1953, steel grid walkways were relatively new. I simply sanded off the grid, and glued some Evergreen 0.020-inch thick grooved styrene (from sheet no. 2067) on top of the Walthers deck.
I then cut the deck in half to make two shorter decks. This immediately suggests a small problem, in that the kit has only three vertical supports, while building two platforms pretty clearly requires a total of four. I simply made another support, with Evergreen C-channel legs (no. 262, which is 0.080-inch channel) and HO scale 2 x 8-inch strips (Evergreen no. 8208), and assembled these to match the kit supports. Another strategy would be to support one end of one of the platforms against a building, which would avoid having to scratchbuild a support.

You can see the dark gray plastic of the Walthers platforms under the white scribed styrene overlay. I included a kit support so you can see the white styrene support next to it was modeled on it.
The next steps will be to start assembling the pieces, mostly using kit parts. I will show more progress on the platforms as they come along.
Tony Thompson
Posted by Tony Thompson at 11:46 AM