Awhile back a friend sent me a link to a site that is offering 3-D printed versions in HO scale of steel castings from Bethlehem Steel, some of them very big. The company is Multiscale Digital LLC (see their products at this link: https://multiscale.digital/ ), and I bought a few to try out. I received them and was very pleased. Here is one of them, of the three pieces I bought, called a “double bearing support”: 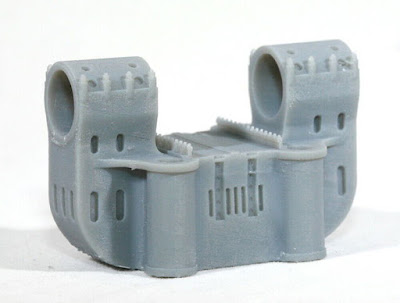 I had not gotten any further with preparing any of these loads for use, when I went off to the annual freight car get-together at Cocoa Beach, Florida, last January. There I saw models displayed by Eric Thur, and his explanation that he had purchased a CD of Bethlehem photos of large steel castings years ago, and not seeing easy ways to make them himself, had contacted Multiscale Digital and gotten their agreement to print them. That’s how they are now being produced.
Below is one of Eric’s photos of the prototype for the casting you see above. The workman alongside is a vivid indication of the size of the casting. 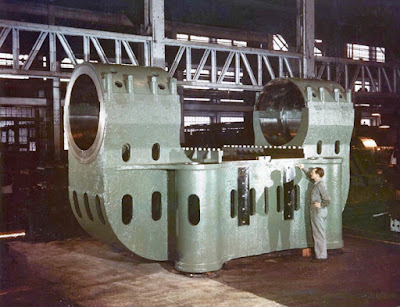 Eric also mentioned that he had not worked on the loads much, because he was also waiting for better heavy-duty flat car models to carry them, but several good candidates were recently introduced as kits by Funaro & Camerlengo (F&C). Eric brought his development of this same casting to the exhibit at Cocoa Beach, shown here on a heavy-duty flat car from F&C. (You can click on the image to enlarge it if you wish.) 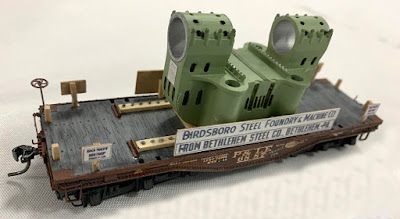 I like this light green “machinery” color. Taking Eric’s description as a starting point, I used Model Master “Interior Green” (FS 34151) — a disturbingly institutional green — and added about one-third white. So the way I painted my model looks like the one above of Eric’s. Note that the interior of the bearings is painted aluminum. 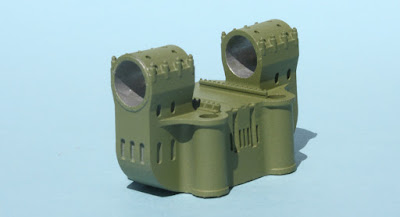 To place a load like this on a flat car, blocking needs to be added, but I will postpone discussion and modeling of that blocking to a future post.
Another product that I purchased from Multiscale Digital is the crosshead for a really large hydraulic press, modeling one produced at Mesta Machine in Pittsburgh (actually West Homestead). Mesta, founded by George Mesta in 1898, was one of the premier suppliers of heavy machinery in the U.S., especially to the steel industry; at one point,  more than 500 mills had Mesta machinery in them. That’s why, at least as late as 1970, Mesta equipment was both legendary and ubiquitous in the steel industry. This crosshead model was painted the same lightened green color that I used above.

The cast-on name “Mesta” is upside down here, because the bottom of the crosshead is uppermost. This is how the prototype crosshead was photographed, and has some detail on this surface. The other side had none.
And you may note that I only painted the faces of the crosshead, since that is how I remember the paint scheme of the large hydraulic presses at Alcoa’s Vernon Works, where I was employed a couple of summers during college.
This load too will have to have some kind of blocking and load restraints added, a topic to which I will return. And both these would be quite heavy loads, calling for special flat cars to move them. As it happens, like Eric, I too have been working on a couple of heavy-duty flat cars (for example, see this post: https://modelingthesp.blogspot.com/2020/05/sp-200-ton-flat-cars-part-4.html ). It will be nice to bring together these dramatic loads, and some appropriate flat cars, and they will be fun to operate on the layout, too.
Tony Thompson