In my article in the January 2020 issue of Model Railroad Hobbyist, which was about graffiti for post-1980 freight cars, I included some description of how I make paper overlays for graffiti images. A brief summary of the method was included in the blog post I wrote about that article (it can be found at this link: https://modelingthesp.blogspot.com/2020/01/my-latest-column-in-mrh.html ). Subsequent posts may be readily found by using “freight car graffiti” as the search term in the search box at right.
The present post describes further development of the overlay method. Essentially, my overlays start with a photo of an actual graffiti piece, then scaled for HO, printed out on plain paper, and glued to the car.
Those overlays were primarily intended for smooth-sided models, such as “Center Flow” covered hoppers, though I did show in the article that I applied an overlay to a box car model with outside ribs of modest height. But as I have  continue to work on rib-side ballast hoppers for Seth Neumann’s 1999 layout, I decided to see if I could make overlays work on top of deeper ribs.
I began by trying something small, that could be placed over a single rib on these Walthers 100-ton hopper models. I had a graffiti piece (shown in the MRH article), and chose from it the letter “O” at the left end of the piece: 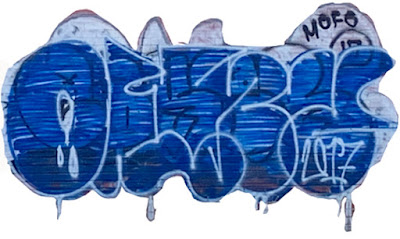 As with other paper overlays, I cut it out of the paper sheet, sanded it thinner, especially at the edges, and applied with canopy glue. The key was to get one edge of it down flat in one “bay” between ribs, press it into the corner of the base of the rib, fold over the top of the rib, and press into the next corner. Here is how it turned out. Somewhat to my surprise, it worked fine.

In the photo above, you see the dark blue letter “O” at the left edge of the large piece, on top of it (a common practice in the graffiti world).
Next I wanted to try something a little bigger, spanning more than just one rib, to see how far the technique could be pushed. My next choice was a slightly larger piece I had photographed on a wall in my local area, perhaps spelling out “chek.” 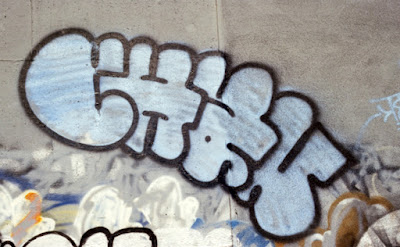 Again, this was scaled, printed out, trimmed, sanded, edged with marker, and applied with canopy glue, in the same sequence: filling one bay to the rib, carefully wrapped over a rib, fill the next bay to the corners, wrap over rib. etc. This one covers three ribs, and again, worked very well.

Gaining confidence, I decided to try an overlay that would span five ribs. If I could manage three ribs, as above, why not five? The graffiti piece chosen is taken from page 175 in the fine book, Freight Train Graffiti, by Roger Gastman, Darin Rowland, and Ian Sattler (Abrams Books, 2006). Here it is applied to a hopper car, as yet unweathered:

(For the rest of Seth’s SP rock car fleet to which I have applied graffiti, you can view this post: https://modelingthesp.blogspot.com/2020/05/freight-car-graffiti-part-13-sp-rock.html .)
I did have a really large piece that I wanted to apply, if I could somehow just do a little bigger overlay yet. The piece was found on a freight car, part of a string of HLMX cars. They were tough to photograph behind the fence, as you see with HLMX 75313. (The HLMX mark is owned by Helm Financial, a major railroad equipment leasing firm.)

But one of them happened to be near a hole in the fence, and I was able to get this shot of car HLMX 75307. A photo like this can be squared up in Photoshop and then printed out on paper in the usual way. I went ahead and did that, even though shadows of some of the ribs are evident. 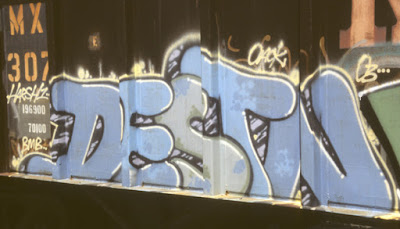 This piece was printed out to be somewhat bigger than it is on the prototype car, and by working quickly and carefully, I was able to apply the entire thing in one process. (This is the opposite side of the SP hopper shown above.)

It has been an intriguing challenge to apply such large paper overlays across multiple ribs of cars like these rock hoppers, but it does work quite well, and much more easily than I expected. I now have confidence that any graffiti piece that I want to apply in paper form will in fact be practical.
Tony Thompson
Posted by Tony Thompson at 10:43 AM