I began this series of posts with a description and photographs of the Southern Pacific prototype heavy-duty flat cars of 200-ton capacity, all riding on four 100-ton trucks under span bolsters. (That initial post can be found here: https://modelingthesp.blogspot.com/2019/11/southern-pacifics-200-ton-flat-cars.html .)
I then followed that with two posts about modeling these cars, one of them about the Athearn HO scale model, which has a number of defects from the viewpoint of prototype accuracy, though some of them are readily correctable (see that post at: https://modelingthesp.blogspot.com/2019/12/sp-200-ton-flat-cars-part-2.html ).
The next post was about the first steps in building the new Funaro & Camerlengo kit for one of these cars that was based on a General Steel Casting (GSC) one-piece cast steel frame. My focus was the span-bolster trucks (the post is located at: https://modelingthesp.blogspot.com/2019/12/sp-200-ton-flat-cars-part-3.html ). In the present post, I resume construction.
At some point early in the kit assembly period, one is bound to notice that this car is not going to weigh very much. Even with the metal wheelsets I used, as mentioned in Part 3, the combined weight of body, trucks and span bolsters is only about 1.5 ounces.
I added small rectangles of lead sheet, 1/16-inch thick, cut from a one-foot-square piece of roofer’s lead that I bought decades ago (and I still haven’t used a fourth of it). The little rectangles of soft lead can be gently tapped with a hammer to shape them to fit where they are going. These were glued into the frame recesses with canopy glue. You can see these in place below. In all, I only was able to add one additional ounce of weight, but that will help.

Following kit directions, I added the grab irons, two on each side and two on each end. Next I added the couplers. Here there are difficult choices. One can again drill into the not very thick deck and attempt to keep from breaking through, then use a bottoming tap to achieve a screw attachment.
The alternative is glue. In the past, I have been successful in attaching a coupler box lid with CA, then attaching the box itself (with coupler inside) with canopy glue. If it were ever necessary to re-open this coupler box, the canopy glue will soften with water and permit removal.
I decided to start out trying the method with screws. It turns out that a 1/4-inch long 2-56 screw is just the length of the Kadee coupler box plus the depth of the car deck. This is a Kadee #158 whisker coupler. 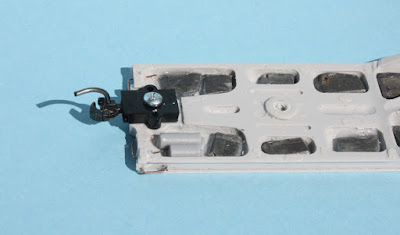 With those additions, the car is nearly ready for paint (really only missing the vertical-staff hand brakes, and the corner sill steps). Here is the car on its span bolsters, to see the overall look and to check trackability.

Everything went well in the tracking check, so I installed the sill steps with CA. They are surprisingly solid. I also installed the vertical-staff brake wheels, using some brake wheels I had in my stash instead of fussing with the resin ones provided. Shown below is the car on “interim truck support blocks” (for a description thereof, you might like to read this prior post: https://modelingthesp.blogspot.com/2014/11/interim-truck-support-blocks.html ).

The model is now ready for the paint shop. I will return to this model when its painting and lettering is done.
Tony Thompson
Posted by Tony Thompson at 10:18 AM