In Part 1 of this series, I showed prototype photography of Southern Pacific’s 200-ton flat cars, which in the transition era were all four-truck cars. All were built using General Steel Casting’s one-piece cast steel underframes, which included side and end sills. Only decking needed to be added, along with brake gear, trucks, and couplers. That post can be found at this link: https://modelingthesp.blogspot.com/2019/11/southern-pacifics-200-ton-flat-cars.html .
I now want to turn to modeling these cars. For many years, there has been an HO scale model of this type of car, produced by Athearn. It was not a great model, but close to the right length and appearance. One of its big drawbacks was how high it sat on the span bolsters. Below is Athearn’s own catalog photo, and you can see the height of the side sills above the trucks.

Just for comparison, shown below is a photo of the prototype from the previous post. Toward the left of the photo, you can clearly see how close the top of the truck sideframes are to the side sill, and can compare that appearance to the Athearn model shown above. 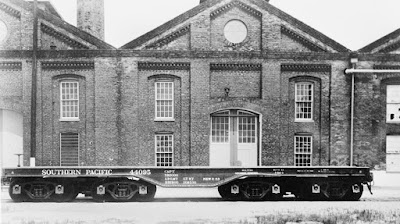 The Athearn model can be improved considerably in appearance by sanding or filing down the span bolsters in thickness, removing material from the top of the bolster. This is not difficult and the function of the span bolster is easy to retain. You could easily do this with an existing model.
Years ago, I did that work on an Athearn model, and the resulting span bolster is shown below. You can see that its top is only about as high as the wheel diameter, just like the prototype (a prototype photo of a span bolster assembly is included in the previous post, cited in the first paragraph of the present post).

The completed model was then lettered for SP 44095. As you can see below, the car does sit down low over the trucks, as it should. But this model still suffers from a serious problem. The car body is unaltered from what Athearn produced, and the side sills are much too deep. But because the overall appearance is all right, this model has served on my layout for some years.

Now comes news of an actual correct model of the General Steel Castings four-truck flat car, in the form of a kit from Funaro & Camerlengo. It actually has prototype dimensions! (The SP version is kit 8471.) I will report on the kit, and building it, in a future post. I am also interested in sufficiently big and impressive loads for such a car to carry, and will report on some of those prospects, too.
Tony Thompson
Posted by Tony Thompson at 11:38 AM