As modelers, many of us are interested in, and often strive to accurately reproduce. the lettering on freight cars. I am certainly in that group. In that light, I thought it might be useful to describe a little of how the prototype does this lettering.
Certainly in the 19th century, and in some instances such as billboard refrigerator cars in the 20th century, this lettering (and decoration) of freight cars was done by people with the skills of sign painters. That is, it was done essentially freehand, though certainly guided by drawings or sketches, and the lettering was intended to be of sizes that were standardized, first by individual railroads, eventually by the Master Car Builders for all railroads.
With the rise of standards came the widespread use of stencils to reproduce the desired characters. Many of the smaller stencils were thin sheet metal. An example is the 1920s photo below of a Class A-50-6 automobile car about to be lettered after repainting at Los Angeles General Shop (SP photo, Steve Peery collection). 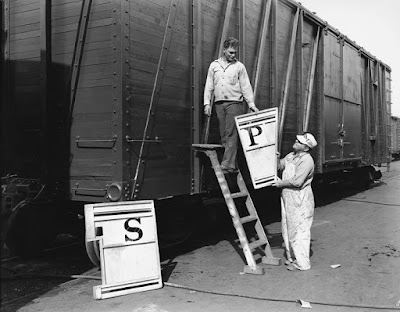 Note that the stencils are shaped to fit between the side posts and braces, ensuring that the letters are at the correct height, and that the lines to go above the initials and below the car number are also present. The “half ladder” being used is interesting too.
Naturally the railroad emblem or medallion was even more suited to stencil reproduction, and in this 1922 photo, you see one in use. Note that the frame hangs from the roof edge, guaranteeing correct height. The photo was taken at Los Angeles (SP photo, Jim Seagrave collection) 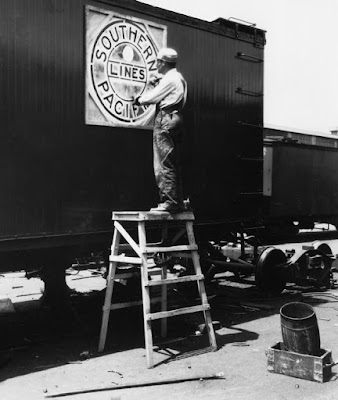 Here the painter is using stencil paste and a brush with short, stiff bristles. You can just see the brush in his right hand, in a “fist” grip. (Click on the image to enlarge it if you wish.)
By the 1930s, hand-stenciling with stencil paste had been largely superseded by spray painting, at least for new or major lettering. This was an especially valuable tool for larger stencils, such as the Santa Fe slogan shown below. This photo is from the ATSF Annual Report for 1951. 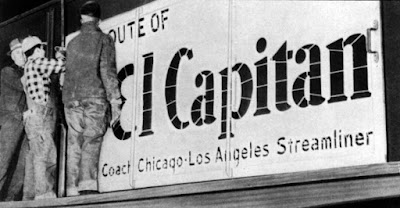 Evident are the many slender connectors holding the interior parts of the stencil in position. A stencil like this, once spray painted, would be touched up by hand to cover all those connectors.
With new cars, it was common to make up a stencil for all the capacity data, since presumably every new car would have the same light weight. The photo below, depicting the lettering on what would be UP 101604, shows that the first four digits of the car number, not yet applied, are on a single piece of heavy stencil paper. (UP photo, Clark Bauer collection) 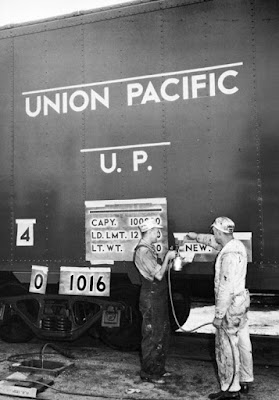 The two men are not wearing any protection against paint dust and vapor.
Finally, an example of Pacific Fruit Express technique, showing a painter adding end lettering with one stencil having both the initials and the first digit of a series of car numbers (resting on the coupler). He then adds each additional digit by separately stenciling it from a set of all ten digits. The painter’s “eye” was vital in the lettering being aligned and properly spaced. This photo is a PFE’s Los Angeles shop in 1946 (PFE photo, author’s collection) 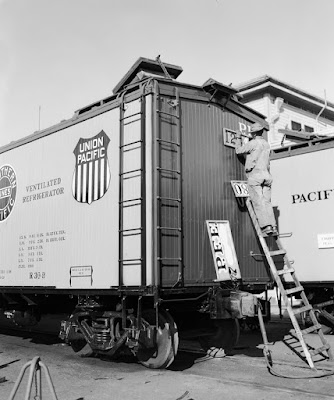 These examples show that the prototype took pains to get the lettering in the right place and entirely standardized as to characters, though of course mistakes were possible. The famous example below (D.F. McFall collection) shows a case of the second and third stencils for the word “Maryland” getting interchanged during lettering.

Understanding how the prototype applied car lettering helps us recognize the places we really need to get the lettering exactly right on models, and where the prototype offers us some leeway. I will return to this topic in a future post.
Tony Thompson
Posted by Tony Thompson at 11:23 AM