Southern Pacific, like all railroads, employed whistle posts, though they called them “whistling boards.” And they were of course used to notify engineers when they were approaching grade crossings, so that whistle (or horn) signals could be sounded as warnings.
The standard SP whistling post was for many years an actual wood plank, 6 feet tall (above ground), painted white, and with a 10-inch high letter “X” near the top. (Many railroads used a letter “W,” to indicate “whistle,” for a grade crossing. SP used an “X” instead, no doubt standing for “crossing,” which perhaps makes better sense after all.) There was a Common Standard (CS) drawing for wood posts, CS 14, but I have not found a copy.
To illustrate what these looked like, the photo below shows a post alongside the first car behind the locomotive. (The photo shows Mogul 1644 doing some switching at Winters, California in June of 1950; it’s from the Eddie Chase collection, courtesy of John Signor.) The post may not look like it’s six feet tall, but it’s hard to see exactly where the bottom is.

There were variations in the original wood post design. Jerry Kitts sent me a photo of an NWP whistle post that he has in his yard, and it is interesting both that the letter “X” is routed into the board surface, and that the “X” is only 7 inches tall. The board is 12 inches wide. The post originally had white paint on the entire face, like the photo above, and the “X” was filled with black paint. 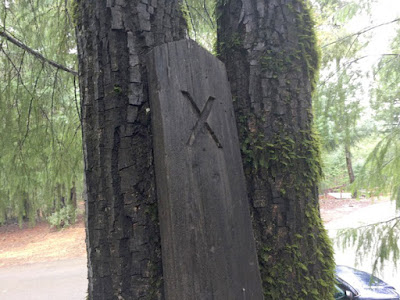 Some time in the early 1950s, as a couple of former employees stated to me, the SP began to put a smaller sign onto a galvanized steel post. Interestingly, it had the same tapered top as the ones you see above, and also that shape at the bottom. I don’t know how widely installed these newer posts may have been, but the one in the photo below dates from 1956. (The photo shows Ten-Wheeler 2366 at Gustine on the West Side Line south of Tracy on March 24, 1956; it’s an Alan Aske photo.) The sign is alongside the first box car in the train. You may wish to click on the image to enlarge it.

I should mention that there does exist a successor drawing, CS 1360, a 1972 revision of the original CS 14 drawing, and like most such signage drawing revisions in the 1950s and thereafter, it primarily replaced wood with aluminum. As the drawing below shows (scan provided by Bruce Morden, and much appreciated, Bruce), this was a one-foot-square sign, standing 6 feet above ground. 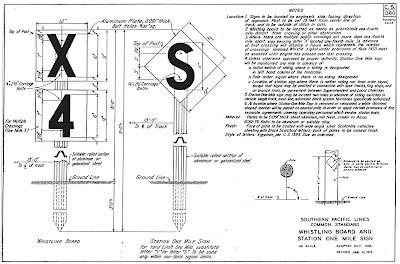 Some of the text at right states that these were to be placed one-fourth of a mile from the crossing indicated, and were to be on the engineer’s side of track, 13 feet from the track center line.
I want to add some model whistling boards, and will probably use the simple plank design as the likeliest installation for 1953 on the branch line I model. (Or maybe one board will be the newer style on a post . . . then it will be a test to see if any visitors ever notice.) I will return to the modeling aspects in a future post.
Tony Thompson
Posted by Tony Thompson at 9:56 AM