No, no, it’s not another coronavirus post. I’m referring to sick freight cars. Anyone who operates his or her models, either personally or in operating sessions, will occasionally find defects arising in car performance. A previously correct coupler height may have drooped; a coupler may have lost its knuckle spring; something on a car has begun to interfere with truck swing; and so forth. Note I’m describing defects that can arise over time. Obviously these and other defects, if present, should have been corrected before a car was put into service.
Now it’s true that most people with operating layouts will have developed some sort of “bad order slip” to report defects. I have had various versions of such a form for years. When something acts up in car performance, I (or a visiting operator) usually fill out a slip. And often these slips remain with the car until it gets corrected. But note the words “usually” and “often.” No further emphasis needed.
With our current “stay at home” circumstances, and working around the layout and my two workbenches quite a bit, I became aware that there are a substantial number of “sick” freight cars here and there, naturally no longer with companion bad-order slips (if they ever had them). Otherwise, of course, they would have been repaired long ago (uh-huh). So it was time to dig into this mini-fleet and get corrections made. 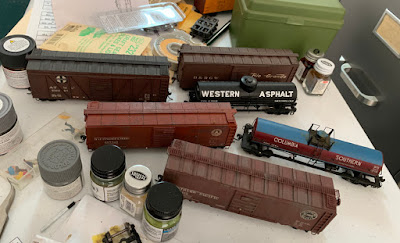 Above you see one part of this fleet of “sick” cars, and it may be obvious that there are no bad-order slips visible.  Here’s another example:

A few of these are construction projects, but most are out-of-service cars needing work.
How to approach this problem? The first step is to re-check the “freight car standards,” along the lines I have outlined in previous posts (for one example, see this post: http://modelingthesp.blogspot.com/2011/03/model-freight-car-standards.html ). This means the performance part of the standards described in that post: trucks and couplers.
I have written previously in some detail about exactly how couplers have to perform (that post is at: https://modelingthesp.blogspot.com/2019/10/maintaining-model-couplers.html ). My test set-up has two Kadee gauges on a length of track, with an Atlas re-railer in the center to make it easy to put cars on to test, all attached to a wood strip (this was designed and built years ago as a gift by Jim Ruffing).

Trucks likewise have to be carefully checked, and I included that as one part of my  “rookie test,” a procedure I described earlier (view it here: https://modelingthesp.blogspot.com/2018/07/the-rookie-test.html ). In many cases, at this point I have already discovered what was wrong with a “sick” car. But not always. A way to check further is a switching test.
Nowadays a challenging switching test, intentionally more challenging than normal operation, has become part of my rookie test. I described it in a prior post (that post is here: https://modelingthesp.blogspot.com/2019/06/rolling-stock-upkeep.html ). Here is a repeat overhead view, of the sequence of track switches, through which I push and pull strings of cars at various speeds, up to pretty high speeds, even up to the locomotive maximum. This does identify cars with stubborn performance problems. 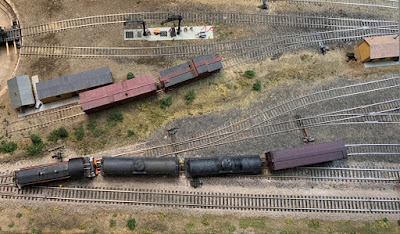 The diverging legs of the two #5 turnouts at photo center are preceded (out of view at left) by the curved part of a #6 switch. Any tendency for truck swing or performance to cause a derailment surfaces quickly in this test (and sometimes couples with inadequate range of swing can do so too).
For the present effort to “heal” more of my backlog of out-of-service cars, I made up a table to be filled out (the form of the table is shown below, though the one I actually use is hand written). The first column is coupler swing and knuckle action, the second is coupler and trip pin height, the third is truck swing and tram, and the fourth, freedom of wheelset rotation in sideframes. Then the fifth is that switching test through chained turnouts (see last post cited in previous paragraph), sometimes followed by a sixth: tests of switching in a couple of different layout industry spurs that involve grades into the spur or other challenges. 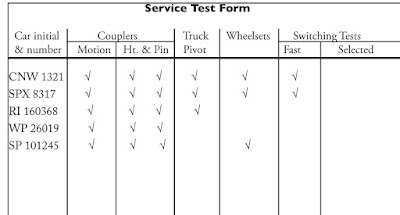 In the sample table above, the first two cars have passed all tests and many not need to be subjected to the test listed in the final column. The lower three cars were still in process of testing at the moment shown for this table.
It has been satisfying to dig into the backlog of “sick” cars that had stealthily grown way too big, thus to clear cars to return to service, and interesting in making sure I am systematic about the testing, and that I can keep the test records for any of these cars, should they act up in the future. And one of these days, these cars will be available when we have operating sessions again!
Tony Thompson
Posted by Tony Thompson at 10:31 AM