The development of a prototypical waybill for model use is an ongoing interest of mine. It all started with Bill Neale’s article in Model Railroader (“Plastic pocket car cards,” February 2009, pages 62–65), with his idea to use clear sleeves, intended for baseball-card collectors, to play the role of car cards. Waybills are simply inserted into the sleeves, which bear labels for individual cars. This meant that the waybills would be about the size of baseball cards, 2.5 x 3.5 inches, plenty of space for generous information (something I like) but small enough to fit in a shirt pocket and easy to handle. I thought Bill’s waybills were a little primitive, but the car sleeve idea really caught my imagination.
The overall ideas I developed for better waybills were shown in my RMC article (“Prototypical Waybills for Car Card Operation,” Railroad Model Craftsman, December 2009, pages 71–77) and expanded in The Dispatcher’s Office (“Contents of a Waybill,” April 2010, pages 17–24), a corrected version of the latter article being provided on Google Docs, as linked in my previous post, “Waybills-2” of January 31, 2011 (see http://modelingthesp.blogspot.com/2011/01/waybills-2.html). But the waybills shown in those two articles had some shortcomings.
A major one was the lack of space for car routing, something I wanted to include, and also (as indicated in my post “Waybills” of December 9, 2010, available at: http://modelingthesp.blogspot.com/2010/12/waybills.html), those bills failed to maintain the vertical division between shipper and consignee information which is so characteristic of the prototype waybill. My December 9 post showed a blank waybill of my new design. Enzo Fortuna’s comment about routing, directed at my “Waybills-2” post, stimulated me to show some examples of filled-out waybills to illustrate how they work.
I will start with a simple example, a carload of ballast which moves within the SP system. Thus routing is not complex, but the features of the new waybill are visible. This bill is filled out with the Bell Gothic typeface, quite similar to SP’s billing typewriters. At the bottom is a car label, which is on the clear sleeve, not on the waybill. 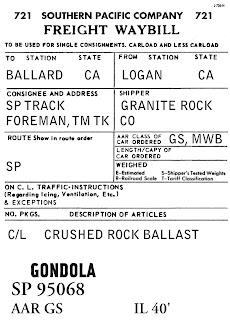 Here is a model GS gondola (a Detail Associates car) with this load:

To show a more complex routing, here is a load coming from the eastern U.S. via Chicago. Junctions which were frequently used had common abbreviations, as here for Youngstown (YNGS), Blue Island (BI), Council Bluffs (CO BL) and Ogden (OG). The bill, of course, is a document of the originating railroad, P&LE, and has P&LE graphics at the top. It is filled out with the “Mom’s Typewriter” face, a good representation of slightly dirty typewriter keys (and available free at www.fontspace.com). 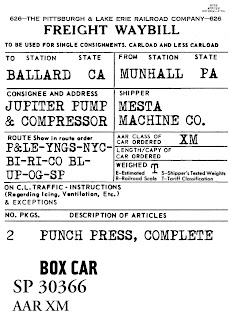 The car in question is an SP car. Modelers often like to have incoming loads arrive in foreign cars, perhaps the home road of the shipper, but under the Car Service Rules, a home-road car for the destination is at least equally probable. That’s what I show in this case. The car (a Sunshine SP Class B-50-14) was photographed on my layout at Ballard prior to delivery.

I’m happy with these revised waybills and think they do a better job of prototype appearance than my original ones, as first published. Operating experience with them is equally as good as with the prior version. Although it’s true that operating crews on my layout have no need whatsoever for this information, nor have they any need to know the shipper, I like to maintain this content in the waybill in deference to the prototype. Prototypical waybills were and are my goal for operation.
Tony Thompson