In my previous post, I talked about the overall meeting, especially the clinics which are an important part of any convention for me. (You can read it at: http://modelingthesp.blogspot.com/2014/01/cocoa-beach-2014.html .) The other vital part of such a meeting is the model displays, which are the subject of today’s post.
Dave Hussey has posted a fairly complete set of photos (they are at: http://www.pbase.com/dh30973/cocoa2014&page=all ), covering much of the display, so I will only touch on a few high points for me personally. One was Chuck Davis’s Erie automobile car with the doors open and station wagons inside, a really nice presentation.

Another model I liked was John Wilkes’ coal loader, a beautifully detailed and interesting model. 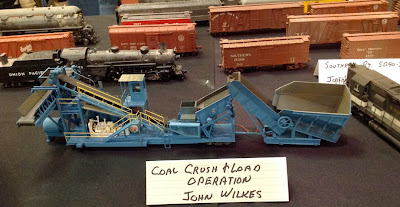 The layouts this year were not particularly stunning, but I did like one N-scale module very much. It depicts the familiar spindly, tall pines of Florida, a superb example of accurately modeling real vegetation. In fact, the module is nicknamed “Old Piney.” The wrinkles in the glued-on sky are the only detraction from the fine scene. You can click on the image to enlarge it. 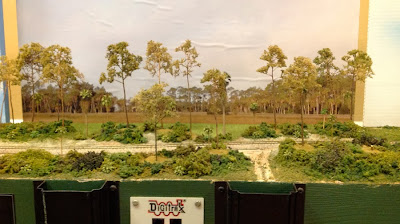 My attention was also captured by Steve Hile’s Union Tank Line car, modified from a LaBelle wood kit, with decals from Silver Crash Car Works. This is indeed the color of UTL cars in the early 20th century. I was intrigued by this model since early SP tank cars were of similar design, and though they were long gone from revenue service by the 1950s I model, some did still survive in work service. I have the same LaBelle kit, and may want to do something similar to what Steve did, to create an SP MOW car. 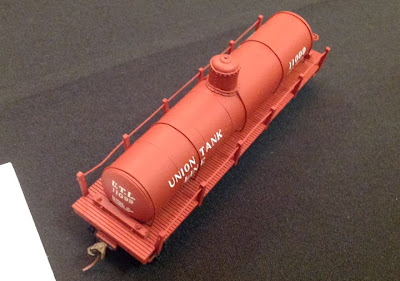 Lastly, I have to mention a stunning development at the meeting: the Rapido meat reefers showed up as door prizes, to the astonishment of many. Then when the prize drawing was held on Saturday night, there was serious excitement about the opportunity to possibly get one. Here is a shot of one of the cars (in its box) being brandished by ticket-caller Greg Martin (just visible with the Hawaiian shirt), flanked by meet organizers Mike Brock at left and Marty Magregian at right. That’s Jeff Aley in the bright red shirt, so the three principals of this meeting are all in one place. But I didn’t win one of the Rapido cars. 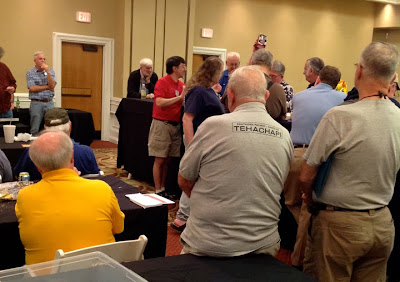 As I said in the previous post, this is always an enjoyable meeting, and to my way of thinking, no longer takes a back seat to the Naperville meeting in October. Thanks again to Mike, Jeff and Marty for another excellent Prototype Rails.
Tony Thompson
Posted by Tony Thompson at 10:40 AM