Today being Halloween in the United States, I thought a post with an orange and black color scheme would be appropriate. The first topic that came to mind is Pacific Fruit Express refrigerator cars, which became orange in 1929 and remained so thereafter. I have been gathering information for awhile on the topic of the appearance of these cars, and today‘s post is the first part of reporting on that. This is different from the PFE lettering posts of a few months ago (which can be found at: http://modelingthesp.blogspot.com/2016/06/pfe-lettering-post-ww-ii-part-2.html ).
First, a few facts. In the 1920s, PFE enjoyed a very large increase in business, and responded by building a very large number of additional cars. These were primarily classes R-30-12 and R-30-13, with different underframes but essentially identical superstructures. These additions to the fleet during 1918–1926 totalled over 20,000 new cars. At the start of this building program, PFE had owned about 13,000 cars; at the end of it in 1926, they owned more than 30,000 cars. All had steel underframes and wood-framed, wood-sheathed superstructures. This huge building program is described in much more detail in the aptly-named chapter, “PFE’s Roaring Twenties,” in the PFE book (Pacific Fruit Express, 2nd edition, Thompson, Church and Jones, Signature Press, 2000).
By 1939, many of these older cars were starting to wear out. PFE undertook a “reconditioning” program, in which necessary repairs were made but superstructures continued to be wood-framed. This reconditioning ended up with about 9000 cars so re-worked and renumbered. Thereafter, during and after World War II, PFE rebuilding programs (now with steel-framed superstructures) continued until 1948, reworking more than 8000 cars. At the end of that work, virtually none of the 1920s cars remained in unrebuilt condition. There were tax and other reasons that contributed to PFE ceasing its rebuilding work, but a major factor in that decision was the exhaustion of available older cars which were suitable for rebuilding. This program too is covered in detail in the PFE book, in a chapter entitled “Rebuilding the Fleet.”
So the first point to be made about PFE cars by, say, 1948 is that practically none of the 1920s cars, with car numbers below 36400, would still be in service under those numbers. By then, most of them had been rebuilt and were still in service, all right, but with new car numbers.
The second point, which I will only touch on in the present post, is that PFE washed thousands of its cars every year in this period (1920 to the mid-1950s). That could be done effectively by PFE because the average PFE car made 10 to 12 cross-country trips a year, and passed through a PFE shop every time when it returned empty, as they almost always did. That was to permit necessary repairs and keeping cars in tip-top shape. Thus any truly dirty car would almost certainly have been washed before it ran very long in that condition.
That is the background for the following model photo, which shows one of Richard Hendrickson’s PFE cars. It even has a few replaced sheathing boards to the right of the door. Note the car at right in fresh PFE orange paint, and note also the scuffed marks behind the ladder of PFE 26218, from crewmen climbing to the roof. 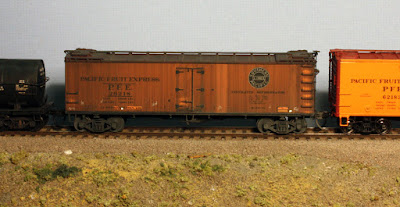 This very dirty car, a member of Class R-30-12, is certainly not representative of the PFE fleet at the time Richard modeled, 1947, though in fairness to Richard’s choice, one could rationalize its appearance by the wartime rule that reefers had to run freely rather than their usual returning-home-to-owner-empty pattern, and thus this car might have stayed off-line a long time.
The car at the right in the above photo, however, shows a much more typical clean car. In my modeling year of 1953, the then-current paint scheme was the all-orange sides, with stripes above and below reporting marks removed, and periods omitted from the initials, as seen below on PFE 48661. 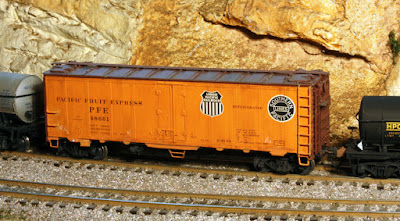