Operating session number 75, and so forth

Last weekend, September 24 and 25, I hosted the 75th and 76th operating sessions on my layout. It was almost hard to believe there have been that many, but I have documentation of the switching assigned for every one, so I’m sure the numbers are right.

On September 24, I asked one of the crews, Jim Providenza at left and Seth Neumann at right, to get ready for a photo, then told them that it was the 75th session. You can see their delight! Jim was the conductor on the Santa Rosalia Local, and Seth was engineer at this point. They are working at Ballard.

The other crew on this day was Mark Schutzer, seen at right when they took their turn, running the Santa Rosalia Local of the day, and Clif Linton at left, who was conductor on the train. 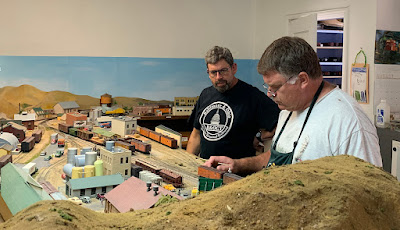 As he often does, Mark brought some of his own SP steam power to operate, and it was especially fun to have an 0-6-0 switcher, even though I don’t have any evidence that any worked on this part of the Coast Division. 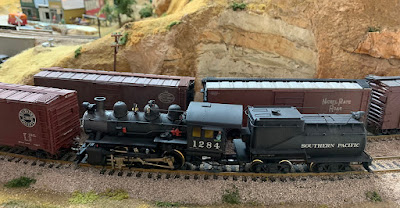 We did find one fault in the trackwork, naturally one that had never occurred before. It was yet another example of Jim Providenza’s axiom, “nothing is gold.” It was a new sag in Track 7 at Ballard, right in front of Jupiter Pump & Compressor, short enough to bother 8-coupled locomotives. After the session, I wedged a No. 11 hobby knife blade under it, which tends to raise it just a little, and repeated that action until a straight-edge showed that the rail no longer had a sag. 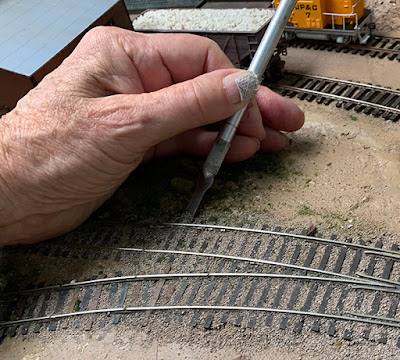 The next day was the 76th session, and a new crew of four was working. To begin, Pat LaTorres (at left in the photo below) and Richard Brennan were working at Shumala. Pat, holding the waybills, was the conductor. You can see that they used the diesel switcher for this session. 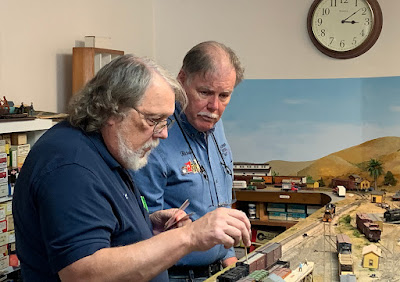 The other crew began by taking the Santa Rosalia Local to Ballard, and below you see them working there: John Sutkus at right, and Steve van Meter at left. Steve was conducting. 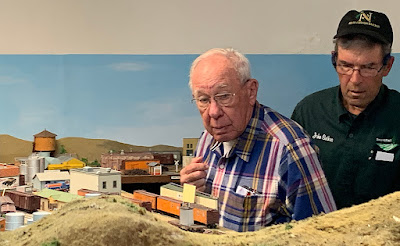 This was a pair of sessions that went well (despite the chance to again demonstrate Providenza’s Axiom), and fun was had by all, certainly including me. I look forward to the next one!