The town of Ballard on my layout is intended as a switching-intense location. I designed the track arrangement as a modification of a published town plan, West Agony on Terry Walsh’s West Agony & Inchoate Railroad. The plan, and a switching problem to illustrate its complexity, was published in Model Railroader magazine (“Problem at West Agony,” Model Railroader, Vol. 27, July 1960, pp. 22–25).
Terry Walsh’s town was laid out in a space 2 feet by 7 feet. I was able to go further and utilize a 34 inch by 8 foot piece of plywood. This permitted a number of industries, as desired. Terry had nine switching destinations at industries, in addition to a house track at the depot and a team track. I have ten industries and also have the house track and team track.
My previous layout was set in the Santa Ynez River valley of California, in central Santa Barbara County, where there is a real location called Ballard, though it has less than 1000 people even today and remains an unincorporated town. I freelanced it entirely, making it a country town with some modern industrial growth. My new layout is set a little farther north, in southern San Luis Obispo County, but I am keeping the Ballard name for this town.
Shown below is a photo of the town as it was on the old layout. In this view, half of the industries are visible (some will not be used on the new layout), with the depot in the foreground. They are as follows: at far left, the Zaca Mesa Winery, and to its right, Ballard Farm Supply (light roof) and Union Brass Foundry (the latter two are being replaced). On the track at the rear are Peerless Foods, a wholesale grocer, and to its right, Nocturnal Aviation. I was able to save the town and its structures as you see it for use on the new layout. 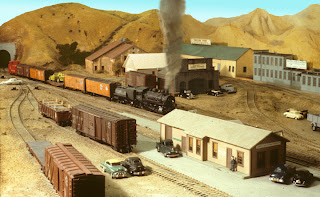 Out of view to the right were a produce shed, a Union Oil bulk dealer, a California Division of Highways district yard, a tool & machine business, and a stock pen. All but the stock pen will be used on the new layout.
On the Terry Walsh version of this trackage, this view would be looking westward. On my  layout today, it is looking northward by compass, railroad westward by SP convention. It is the middle town on my mythical SP branch line layout. I expect to discuss the other two towns in future posts.
Tony Thompson
Posted by Tony Thompson at 4:01 PM