I’ve just returned from another very good Prototype Rails meeting in Cocoa Beach, and full thanks and credit to Mike Brock and his crew for doing the fine job they seem to do every year.
I mentioned last December, in the first post in this thread, that I was working on two projects which I planned to display at the meeting. Quoting from that post, these were, first, a swap of tanks and underframes between two kits:

• A General American 8000-gallon car, modeled by placing an InterMountain tank of that size on a shortened Athearn tank car frame. The Athearn frame, though not very refined in its detailing, is nevertheless a generally accurate General American underframe.
• An AC&F insulated 10,000 gallon car, modeled by cutting an Athearn insulated tank body down in length, and placing it on the frame of the InterMountain car just described. The IM underframe is an AC&F design. The Athearn car body is intended to represent a pressurized or ICC 105 type of tank car, but the prototype being modeled is an insulated but not pressurized car, ICC type 104, so a new dome had to be made also.

Photos of these two cars are included below. The second car, as I mentioned previously, is inspired by a Mark Feddersen magazine article, cited in the previous post.
I should mention in connection with the El Dorado car that it represents a personal connection of sorts, since my great uncle worked for that company and in fact had his home in Berkeley only a few blocks from where I now live. El Dorado was not a petroleum oil company but one which processed copra (dried coconut meat) and other materials to make a variety of vegetable oils. 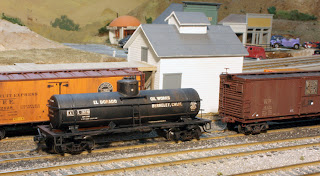 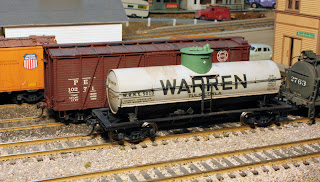 I based the lettering and overall appearance of both cars on prototype photographs. Likely I will prepare magazine article about these cars, but if not, I will summarize the modeling methods in a future post.
The second project was a continuation of earlier work, applying scratchbuilt tanks to Tichy underframes to model tank cars with no commercial equivalent. Previously I described it this way:

• A 6000-gallon car, with a slender dome like an acid car but in this case for shipping hydrogen peroxide by the Buffalo Electrochemical Company (Becco), modeled with a Tichy underframe and scratchbuilt tank from Plastruct tubing (body) and aluminum tubing (dome).

Again, the basic method is inspired by Mark Feddersen’s article on the Becco peroxide car, cited in the prior post, but with a number of modeling variations. As with the kit swap described above, I may do a magazine article on my method, but otherwise will do a post here summarizing the modeling. Here’s the completed Becco car that I did, along with a Stauffer acid tank car built earlier with the same method (and coupled to a 10,000-gallon tank for size comparison). 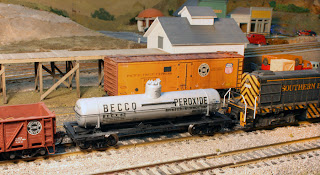 It was an interesting challenge and certainly a learning opportunity to develop methods to get these tank cars together. I photographed all four of these tank cars at the town of Shumala on my layout.
Tony Thompson
Posted by Tony Thompson at 4:18 PM