As I do almost every year, I traveled a week ago to Cocoa Beach, Florida, for the outstanding “Prototype Rails” meeting organized by Mike Brock. Mike has a tremendous crew behind him, from Jeff Aley who runs the program, to Marty Megregian, Scott Dam, and others who help with arrangements. The experience of this crew is obvious: the meetings are well planned and run smoothly. This year was no exception.
The clinic program was very good. I will just show a photo from one of the many talks I enjoyed and learned from, Bruce Smith’s presentation on etching brass parts. That’s Bruce at upper right alongside the screen, about to begin his talk. 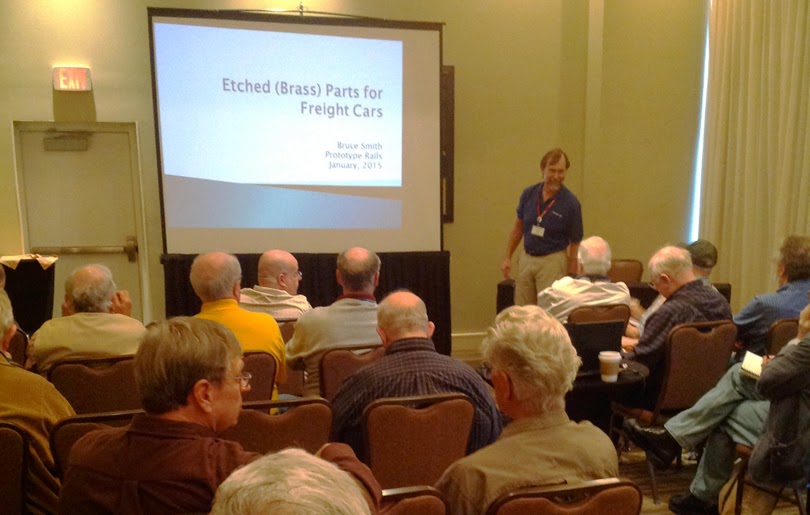 There are always a good assortment of vendors at the meeting, many of them the specialized people we don’t readily see otherwise, from Funaro & Camerlengo, Motrak, and Speedwitch Media, to Cannon & Company, with Dave Hussey behind the table. 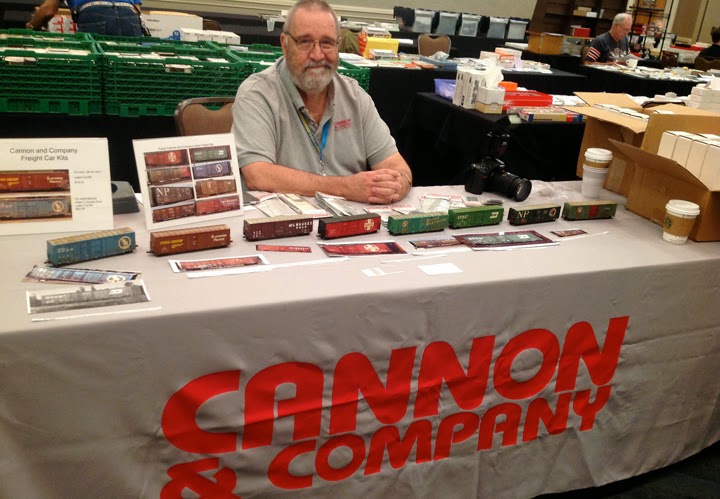 A high point for many attendees is the huge model display. Many folks just bring the models and lay them out on the table, but others provide detailed descriptions of how the model was built, parts and decals used, etc., and often the prototype photos used for reference in the project. These are truly learning moments, and I find the partly completed models the most informative, because you can see clearly what the modeler was doing.
Bill Darnaby brought an absolute fleet of tank cars. He also included two of the forthcoming acid tank cars from Frank Hodina’s new Resin Car Works, both completed cars and a sample of the kit parts (foreground). All the tank cars were excellent and a pleasure to see. 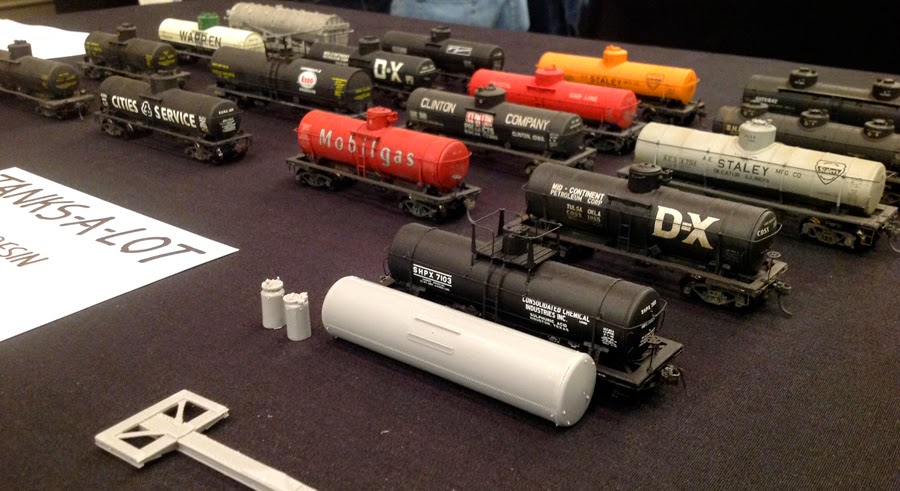 Another striking model exhibited was Marty Megregian’s O scale Union Pacific shop switcher, built by combining running gear, boiler and other parts acquired over a period of years, and building the cab and water tank. He provided a full written description of how the project was carried out, too. Really impressive. 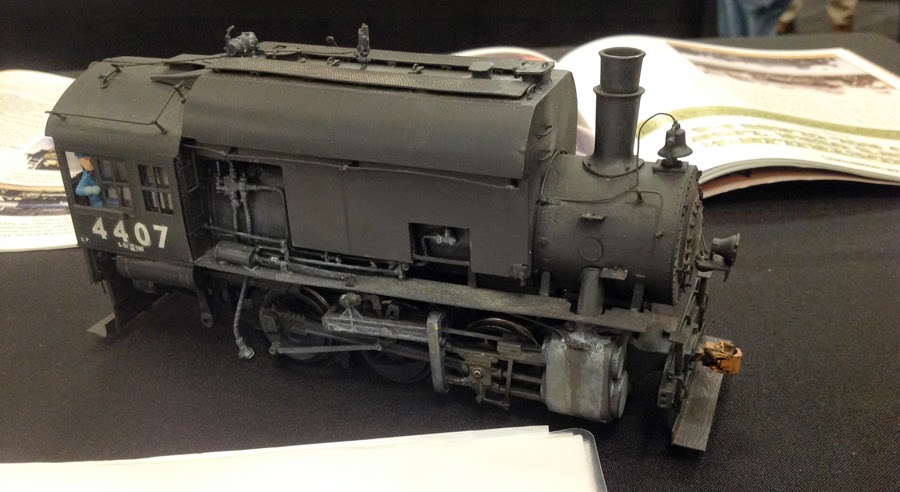 Being a freight car guy myself, I naturally gravitate to examination of those kinds of models in the display, but as usual, there were also some very nice structure models shown. Jared Harper had a bunch of elegant components for stock pens, and Mike Evans showed a very neat vintage gas station. 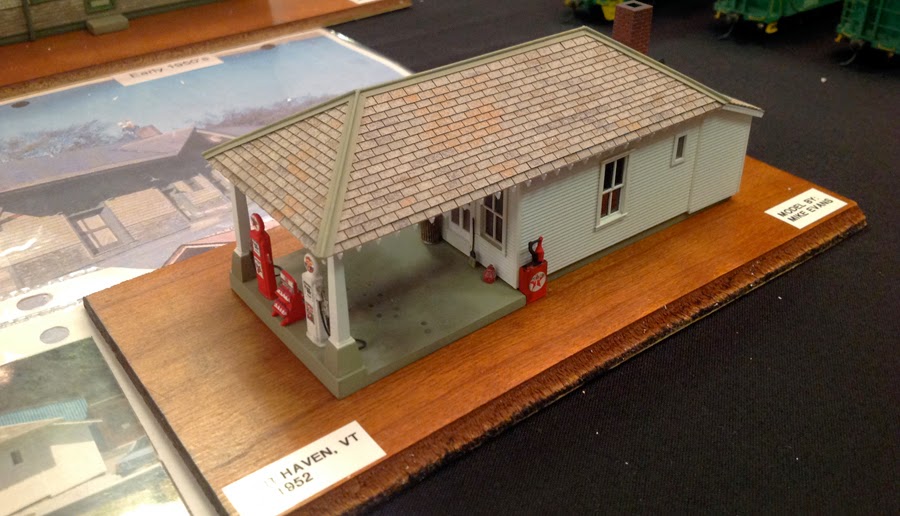 Lastly, here is just one example of someone (in this case, Al Brown) telling us all about how the model was built, and showing it unpainted. This model has plain styrene sides with Archer rivets, an Accurail underframe, ends and sidesill castings from Chad Boas, Red Caboose roof, doors and running board, and various parts from several sources, representing a rebuild of a USRA double-sheathed box car to be a Santa Fe Class Bx-31. (This is a variant version of one of the 2014 Shake ’n’ Take models.) Nice modeling, and an informative presentation. 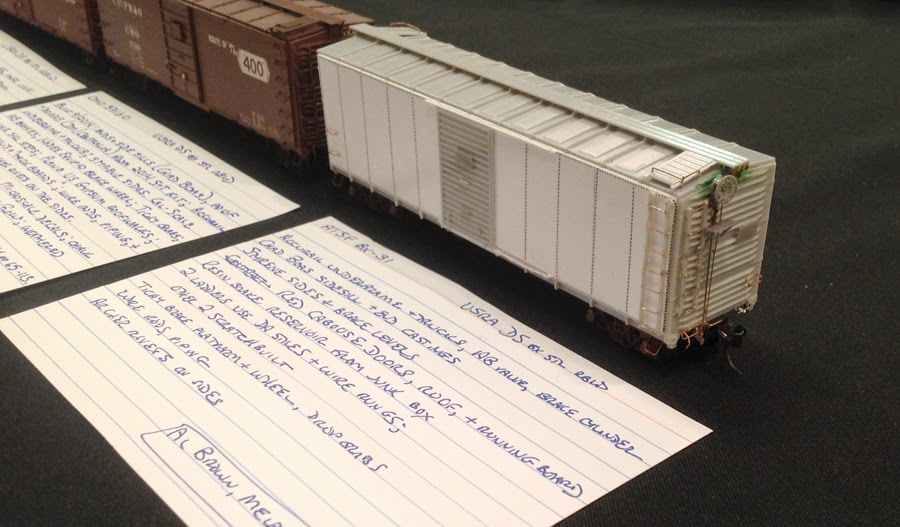 And yes, there is sometimes less formal fun going on, too. This year Arved Grass, responding to my telling about a lapel badge Richard Hendrickson wore years ago to a few meetings, had a bunch of them made up. He and I handed them out, and pretty much gave them all away (if you want one, please contact Arved). Here is what it looks like, pinned to my shirt: 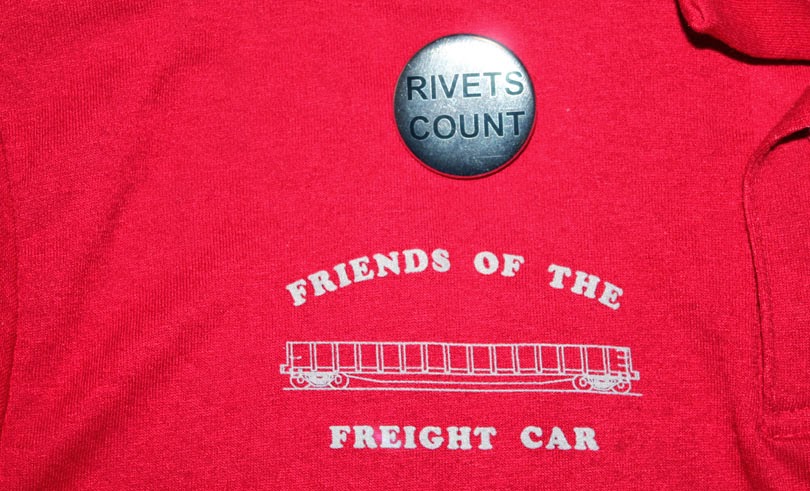 I continue to find real value and pleasure in attending this meeting, even though it takes place about as far from where I live as anywhere in the lower 48 states. I certainly plan to be there next year.
Tony Thompson
Posted by Tony Thompson at 10:15 AM