My layout is like many model railroads, in that it probably has too few watercourses. But by way of justification, it does happen to be true that the area I am modeling, south of Oceano, California, is flat and sandy, and creeks tend to be small and to meander gently to the sea. (You can view my post about this area at: http://modelingthesp.blogspot.com/2012/11/visiting-area-you-model.html .) But both because waterways are part of the real world, and because when you include one, you get to build a railroad bridge too, I have striven to add them where I can.
I will just emphasize at the outset that this particular creek is of no great significance, and I am only describing its construction to illustrate how one can go about planning and building any small waterway.
The present subject is a small creek in my area, called Oso Flaco Creek. On my layout, it lies at the (railroad) east edge of the town of Ballard, which thus can have the useful quality of providing a scene divider from the next town on the branch, Santa Rosalia. My overall locale, including both these towns, has been discussed previously (if you’re interested, my general discussion of locale is at: http://modelingthesp.blogspot.com/2011/01/layout-design-locale.html ).
Before going further, I should mention that anyone who has been attentively following this blog may recognize the name, Oso Flaco, because I had previously used that name for another creek on the layout (see for example: http://modelingthesp.blogspot.com/2013/03/layout-fascia-part-2-signage.html ), but subsequently I realized that the prototype Oso Flaco Creek is really further south, and the creek at the north (railroad west) end of Ballard is nearer to the prototype Cienaga Creek. My fascia signage at Ballard now reflects that change; you can compare the signage in the just-cited link. 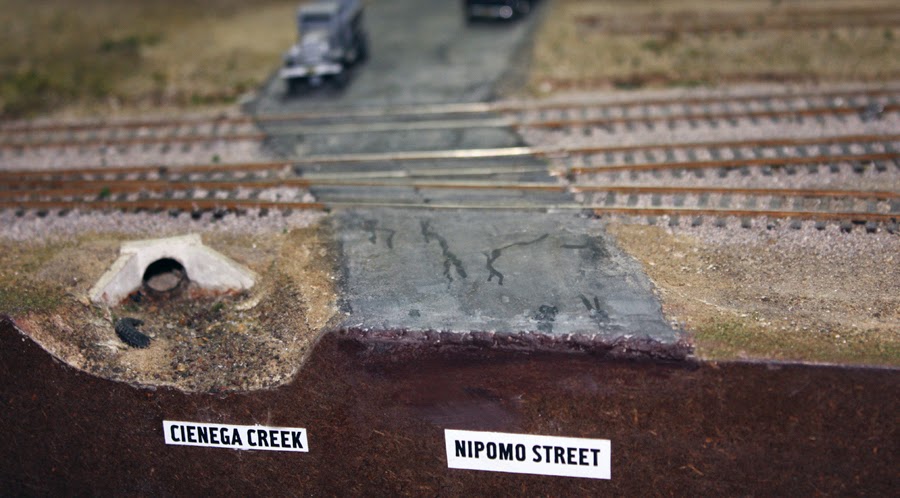 In Spanish, “ciénaga” means “marshy,” which is certainly the character of this creek as it nears the ocean, but not in my modeling area.
One attraction for modeling Oso Flaco Creek is its thoroughly historic name. The Portolá exploring expedition in early California camped along this creek on September 2, 1769, and some of the soldiers killed a bear (they had seen troops of bears in the area earlier). They named it El Oso Flaco,  which in Spanish means “the lean bear” (sometimes translated as “the skinny bear”). Subsequent Spanish manuscripts consistently used this name for the creek and the shallow lakes through which it flows to reach the sea.
This is a good example of combining research into place names (for me, Erwin Gudde’s great book, California Place Names, University of California Press, 3rd edition, 1969 is an essential reference), with the detail which can be gleaned from U.S. Geographic Survey topographic maps. Of course, following the iron-clad rule of using USGS maps, which is that the area of interest invariably falls at the intersection of two, and sometimes three maps, I actually got lucky and only needed two, the Oceano and Guadalupe quadrangles.
Now to the model. My track board for Ballard, with Homasote as the top member, simply was cut off short where the town ended. My first action here was to see how the space for this small creek looked, and to plan how it would be modeled. I started by placing some scrap Homasote pieces to make trial creek banks and, when this looked feasible, I placed a little Sculptamold to make a somewhat meandering course. Putting a little brown paint onto some of it helped visualize what I was starting to get. Here is an overhead view at this point. The bare plywood is the creek bottom. 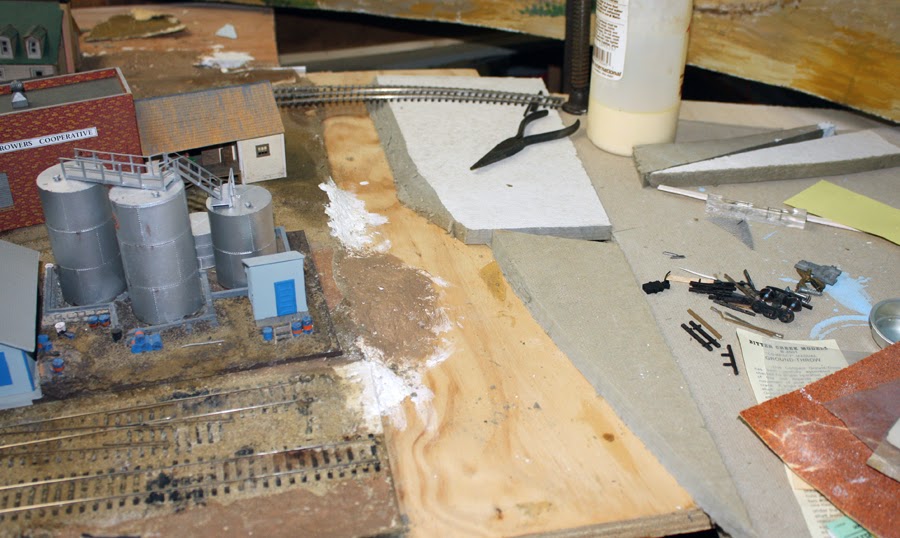 The Union Oil depot and, behind it, the Wine Growers Cooperative, are the industries here. The base of the backdrop, curving around to the right toward Santa Rosalia, is visible at the back of the image. The Homasote pieces temporarily defining the course of the creek are not glued down. The experimental start on a creek bank is visible too.
More refinement is obviously needed, and I need to build a pile trestle for the railroad to cross the creek (a typical Southern Pacific bridge type in this situation). Since this creek is little more than a trickle during most of the year, I will model the bed of the creek as mostly stony and sandy, with a narrow thread of water in it. Also necessary is to plan how the creek “disappears” toward the backdrop. But I’ll take up those topics in a future post.
Tony Thompson
Posted by Tony Thompson at 9:43 AM