In the previous two parts of this series, parts 88 and 89, I described what a “temporary waybill” was, for use of a conductor needing to move a loaded car but with the full, regular waybill not yet made out for some reason. I showed a Northern Pacific example of such a form, and mentioned that the Southern Pacific version was called “Form 704.” (To read that prototype discussion, see this post: https://modelingthesp.blogspot.com/2021/08/waybills-part-88-temporary-waybills.html ).

In the following post, I experimented with making up a model-operation version of the NP form, just to have a starting point. I recognized that since these forms were railroad-specific and not valid off the rails of the issuing company, that they were unlikely to have much commonality (the model example was shown here: https://modelingthesp.blogspot.com/2021/09/waybills-part-89-modeling-temporary.html ).

But since I had not been able to find an SP Form 704, I was afraid my model “example” drawn from the NP prototype would have to serve. Luckily a reader of this blog, Mike Yoakum, realized he could help. He has a copy of the SP Circular 40-1, entitled “Instructions to Conductors, Station Gatemen and Train Auditors,” rather obviously a companion to the Circular 39-1 of which I have a copy, with the title, “Instructions to Station Agents.” Both these kinds of employees had to deal with Form 704, but a copy was included in Circular 40-1 (though not in Circular 39-1). It’s shown below. (You can click on the image to enlarge it if you wish.)

You will note that this form is long and narrow, specifically about 4.5 x 11 inches, obviously sized to fit comfortably with a stack of regular waybills, folded the long way. This was done so that the consignee side was uppermost, the only aspect of interest during the car’s journey.

Note also in the form above that it is shown typed, intended as an illustration, but nearly all agents had billing typewriters, which had only capital letters, and of course conductors had no typewriters of any kind. So the appearance above would reflect few if any actual Form 704s in use.

Note further, in the form itself, that the SP Form 704 has no provision for perishable cargo, unlike the NP form shown in preceding Part 88.

Mike was also kind enough to send me the associated rules for use of Form 704, from Circular 40-1. Form 704 was a four-part form, and each part naturally had a specific use. But first, let’s look at Rule 26, describing the use of the form. It’s the first rule in the section about waybilling freight. 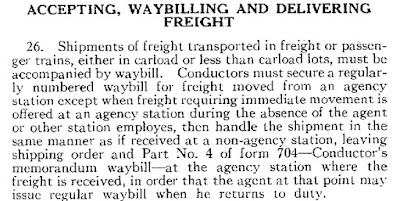 As was mentioned previously, one important use of Form 704 was for freight picked up at a station with no agent on duty (“non-agency station”). But the rule above shows that any freight requiring immediate movement, for which no waybill was yet available for any reason, would move on Form 704. And as we saw on the similar Northern Pacific document, the document was only valid on-line. Here is Rule 50.

You may note that it is Part 2 that accompanies the car in its onward journey, either to destination or the off-line interchange point. Parts 3 and 4 were used as follows:

Obviously Rule 55 applies to cases where the next agency station can prepare the waybill, omitting the situation where the full waybill, when completed, will be forwarded from the originating station to destination or off-line interchange point (see Rule 50).

So for model use, it seems clear that we need to produce a Part 2 version of Form 704. I have experimented with doing so, and will show some results in a following post.