I introduced the topic of “temporary waybills,” as they were sometimes called, in the previous post in this series. I explained that these documents were used to enable a “hot” loaded car to begin its journey in situations where the regular waybill hadn’t been prepared yet. It was a simple card form, and I showed a Northern Pacific example. That post can be found here: https://modelingthesp.blogspot.com/2021/08/waybills-part-88-temporary-waybills.html .

To implement this in model form, I followed my usual approach: begin with the prototype. But I don’t have an SP Form 704 (that was SP’s form of this type, called “conductor’s memorandum waybill,” as mentioned in that previous post). Someday maybe I will find a copy of the Form 704, and can adopt it to model use. But in the meantime, I began with the NP form shown in the previous post.

What I did with that form was to shorten the list of instructions to the most relevant ones, tighten up the line spacing to make the form more compact, remove the safety slogan, and replace the lettering at top with SP style. Then the form was reduced to 2.5 x 3.5 inches, like my waybills. Here is the sort of form I came up with for my interim use: 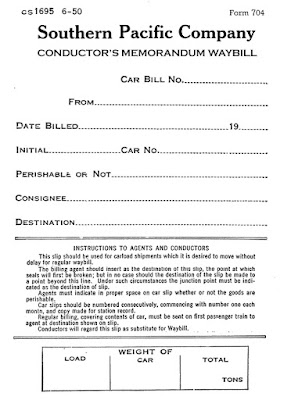 You will note there is space for weights, though any car needing to pass over a scale would not have this information at the time of pickup (with a weight agreement, this would exist). And also, the form shown above is black and white. My intent was to print this on yellow paper, as is done for Empty Car Bills on my layout. An alternative would be manila cardstock, and I may experiment with that also.

Additional features of interest in the form are that neither the cargo nor the shipper are identified, nor is the railroad to which the car will be interchanged. All that matters is that the waybill reach the designated destination point before the car does. I discussed these features of this document in the previous Part 88 post, already cited.

Below is an example of filling out the card by hand, as a conductor or agent could be expected to do. I have written in a cargo weight, implying that there is a weight agreement in force for the shipper in question (that of course could be checked, once the actual waybill arrives at the destination point). 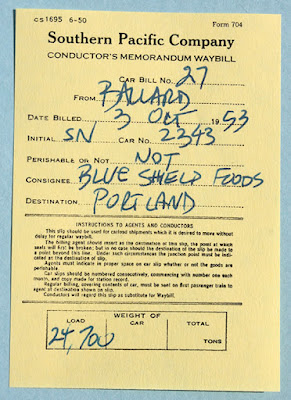 The form you see above, printed on yellow stock, has also been sized to fit into my usual clear plastic sleeves, as are all my waybills and Empty Car Bills, in operation of my layout. Thus a crew person switching at Ballard might have this same form in hand, as you see below. 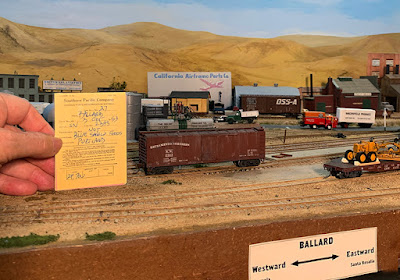 But note that the form is intended to be the conductor’s responsibility. Would he always fill it out? In the photo above, the conductor already has the form from the agent. This could have arisen if the agent still didn’t have everything needed for the actual waybill, but wanted the local freight to pick up the car and get it on its way. Doubtless agents and conductors worked together on such matters. I hope that if any reader has more insight into this situation, that they will send comments.

Until I use a few of these forms in actual op sessions, I won’t be sure what works best, or is most realistic. In the meantime, I can see a few ways to introduce these ideas into operating patterns.