My primary desire in all aspects of my layout is to reproduce actual operating practices and equipment for 1953, and many prior posts on this blog have dealt with that. Today’s post addresses steam (and to some extent diesel) locomotives as part of that goal.
One reason I chose to model the year 1953 is that it was the last year in which steam was the predominant motive power on the Coast Line. The previous year, 1952, had seen for the first time approximately equal locomotive miles worked by steam and diesel power over the entire system (see the graph in my previous post, at:  http://modelingthesp.blogspot.com/2011/04/choosing-and-modeling-era.html). But this was a system-wide fact, and the best-performing steam locomotives had been migrating west into California and Oregon throughout the late 1940s and early 1950s as diesel power was primarily applied in desert regions of the SP. This is why steam in 1953 could be a minority of system-wide power but still dominant on the Coast Line.
Turning now to the Coast Division, I have looked at several of the booklets issued quarterly by SP, entitled “Locomotive Assignments,” which list each division’s assigned power. Although it does not differentiate, for example on the Coast Division, between assignments in San Francisco, San Jose, Watsonville Junction, or San Luis Obispo, it still considerably narrows the entire motive power fleet.
Reproduced below is the Coast Division page for July 1, 1952. It lists 24 diesel switchers in the topmost grouping, and 23 steam switchers (the following group). Diesel switchers included nos. 1019 (an Alco S-1), 1028-1031 (Alco S-3s), 1331-1367 and 1388-1392 (Alco S-2s), all wartime-built switchers, and also nine switchers among 1444-1461 (Baldwin S-12s), built in 1951. The only other diesels are the three 5200-series Baldwin AS-616s, and a series of EMD F7 cab units, 12 A and 12 B units. In the usual A-B-B-A formation, this is only six locomotives, but on the Coast three-unit and two-unit sets were also photographed with shorter trains, so the effective number was larger than six. 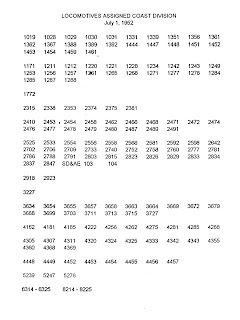 I won’t say more here about diesel power, since I’ve pretty much already summarized my conclusions in a post about diesel locomotive chronology. It’s at: http://modelingthesp.blogspot.com/2011/03/modeling-diesel-locomotive-chronology.html.
Of the 172 total locomotives listed, 121 were steam, vs. 51 diesels. Many of these steam engines were assigned in the San Francisco-San Jose commute pool, particularly the large numbers of Pacifics and Mountains. But the dominance of steam on the Coast Division at this time is clear.
Because this divisional listing cannot identify locomotives which primarily served at one terminal or another, I have turned to roundhouse and yard photographs for approximately 1953 at San Luis Obispo, many of which were published in John Signor’s and my books about the Coast, entitled Southern Pacific’s Coast Line and Southern Pacific’s  Coast Line Pictorial, Signature Press, 1995 and 2000.
I will just present a single example photo, a Mac Gaddis image from 1953 of the right or northern side of the San Luis roundhouse, where the smaller power was stabled in stalls 1 through 10. (In this instance, a 2-10-2 is in stall 10.)

Here is a list of steam locomotives one sees again and again in photos taken at San Luis Obispo, some of which are visible in the photo above: Ten-wheeler 2344; Consolidations 2534, 2592, 2762, 2791, 2803, 2829, 2836, and SD&AE 103; Mikados 3251 and 3264;  and 2-10-2 “Decks” 3661, 3666, 3672, 3679, 3688, 3699, 3703, 3711, 3715. I don’t list power which often operated on through trains, arriving at San Luis directly from Los Angeles or the Bay Area and then returning, particularly Mountains, cab-forwards, and GS engines, since a wide variety of locomotive numbers of these types were seen in photos at San Luis Obispo.
Checking my list of numbers seen in photos against the assignment sheet above will reveal a number of discrepancies. This can be for several reasons: power was only passing through San Luis at the time of a photo, rather than assigned there; power was photographed at a time different from the date of the assignment sheet above (assignments did change all the time); or power may have been temporarily assigned at San Luis, and photographed, and not ever shown in a quarterly assignment.
I have chosen model locomotive classes, and individual locomotive numbers, from the combination of assignment sheet information and period photographs, but I do regard the photo as the ultimate authority that an engine did serve, even if briefly, at San Luis Obispo.
Tony Thompson
Posted by Tony Thompson at 7:44 PM