I was looking over my caboose fleet the other day (a mixed bag by any standard), and thought about what is and isn’t needed to model these cars accurately.
The big picture is that the Class C-30-1 cabooses, far and away the largest class of cabooses ever on the SP, amounted to around 620 total cars, about 470 of them for Pacific Lines. Prior and subsequent wood caboose classes were considerably smaller. Among steel cabooses, the C-40-3 cupola car (185 Pacific Lines cars) and the early bay-window classes, C-30-4, -5 and -6 (135 Pacific Lines cars total) were also prominent by 1953. I’m only briefly relating the history because much more detail, and many photographs, are in my book on SP cabooses (Southern Pacific Freight Cars, Vol. 2, Cabooses, Signature Press, 2002).
What stimulated me to examine my models more closely was one of the Walthers models of Class C-30-1, which has the curved side handrails and the body-mounted end handrails painted white, but with the end-beam handrails not white. I have never seen a photo of an SP caboose so decorated. The standard was to paint the outer part of the handrail on the end or buffer beam, along with the curved side rail, white. This is the most common arrangement seen in photos after 1948 (when the white trim was introduced). Sometimes the outer part, and sometimes all, of that body-mounted end rail is white, but it’s unusual. And the end-beam rail is always white in every photo I’ve seen of a post-1948 caboose, up into the early 1960s.
Let me illustrate this. First, the upper left corner of the lettering diagram (the entire diagram is in the book), describing what was to be painted white.

Second, here’s a photo, taken by Al Phelps in May 1951, showing the arrangement of white handrails that the drawing describes. 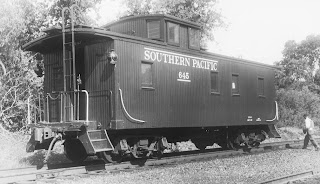 A further point relates to the presence of black roof color on wood cabooses. The cars had a structural wood roof which was covered with canvas and tarred. It was maintained with black roof cement, sometimes applied with a mop, and roofs were accordingly black until about the end of World War II. Thereafter, spray painting of older cars was usually done over the entire car, making it all “metallic” or boxcar red, and gradually causing the fleet to lose many of the black roofs. Accordingly, I have only done a few of my cars with black roofs. Those I’ve done were deliberately brush painted and none too carefully, thus giving some of the unevenness of the mopped car cement.
Perhaps it’s obvious, but all of the all-steel cabooses had boxcar-red roofs when built and thereafter. This description of black caboose roofs applies only to wood cars.
Car numbers: the Pacific Lines Class C-30-1 cars built during 1917-1924 were placed in the number series 586-899. Thereafter, lower numbers in the roster which had become vacant were applied to new C-30-1 cars, car numbers as low as the single digits. In all, there were 155 out of the 470 cars in this class which received re-used car numbers smaller than 586. I wanted to model at least one or two of those car numbers, in addition to the commonly-seen modeling of cars 586-899. (Incidentally, SP reserved the 900 series for inherited and non-standard cabooses. In the 1920s, it was nearly filled with former EP&SW and Arizona Eastern cars.)
I also wanted to model an example or two of the older lettering style, with initials instead of spelled-out road name, placed lower on the car side. Cabooses with this pre-1946 lettering do show up in photos from the early 1950s. Here’s one that I did, and it also illustrates the white handrails and grimy black roof. It’s a Precision Scale brass model, which I painted and lettered.

I’ve now corrected the handrail colors on my Walthers C-30-1 car, and have added a black roof to another car to improve the balance among roof colors.
If nothing else, a caboose fleet should be consistent within itself and with historical evidence for the various visible details. I will discuss steel SP cabooses in a future post.
Tony Thompson
Posted by Tony Thompson at 5:07 PM