As a follow-up to my post on “Choosing a 1953 locomotive roster” (here’s a link:  http://modelingthesp.blogspot.com/2011/04/choosing-1953-locomotive-roster.html), I thought it might be of interest to show information for other parts of the Southern Pacific system (Pacific Lines) to illustrate how unevenly steam and diesel locomotives were assigned across divisions, during the transition era.
The data I show below are from the SP Locomotive Assignments brochure dated June 30, 1951, which I examined at the Library of the California State Railroad Museum (CSRM) last week. It’s among very many SP documents and records amongst their holdings. I haven’t reproduced the data for all divisions, but have chosen what I thought were the interesting parts of the information. An explanatory note: by “Diesel freight,” they meant road diesels of 5000 or less horsepower, such as the Baldwin AS-616. By “Diesel 6000 hp” they meant A-B-B-A sets of F7 units. 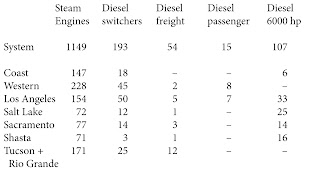 It is striking that the Salt Lake and Los Angeles divisions had the lion’s share of the F-unit sets, and that the three biggest California divisions had the bulk of the steam power. Diesel switchers were very unevenly assigned as well. I combined the Tucson and Rio Grande divisions because they were about equally provided with each type of power.
In my previous post on this topic, I only wrote about the Coast Division (which had 121 steam locomotives assigned on July 1, 1952, versus the 147 listed above for June 30, 1951). I also looked ahead in time to January 1, 1953, and at that time the Coast Division actually had a few more steam engines, 124.
One point to be drawn from these data, I suppose, is that in the transition era on the SP, how one chooses the balance between steam and diesel power, and which classes of steam or diesel engines to model, depends very strongly on the time chosen to model, and of course on the particular division.
Now of course I realize that there are modelers who will tell you that they “model the 1950s” or even that they “model the early 1950s.” If one actually wants to model realistically (a big assumption), such a broad choice of modeling era simply isn’t an option. I made the same point in my article in Railroad Model Craftsman about reweigh dates for freight cars (for a corrected version, see http://modelingthesp.blogspot.com/2011/03/reweigh-article-from-rmc.html). And if you research a variety of eras, you will find that this conclusion can be drawn for most of them, not just for the early 1950s: a great deal was changing over a span of years, and juggling all of it simply can’t be realistic.
There’s a philosophical point to be made here, which I’ll state briefly. I do recognize that everyone pursues their hobby in their own way, and having fun any way you want to have fun, is entirely the point of a hobby. I have no wish to criticize anyone’s choice of how to approach this or any hobby.
But I would just take the position, well articulated by Tony Koester among others, that we can reasonably separate the hobby of “model railroading,” in which real railroad equipment, practices, places and operations are modeled, from the hobby of  “playing with model trains.” If you aim at the former hobby instead of the latter, I cannot make a stronger point than Mr. Koester has done: “You cannot hide behind the oft-heard mantra that ‘It’s my railroad, and I can do anything I want!’ No, you can’t – not if your goal is to convince the viewer, not to mention yourself, that you’ve done a credible job of depicting a specific place and time.”
’Nuf said.
Tony Thompson
Posted by Tony Thompson at 5:59 PM