Operating my layout has revealed an issue I had not thought about previously. This is the problem of waybills for cars in through freights. On the SP, these moved between division points with no switching along the route. (Switching along each division was the job of locals and turns, not through freights.) The cars in these through trains still possess car sleeves, in accord with my original plan (see, for example, my article in Railroad Model Craftsman, December 2009). The problem is what kind of waybills should be in those sleeves.
They could, of course, be waybills like any others. But these would have to reflect both shipping and receiving industries throughout the U.S.A., not just shipping or receiving industries on my branch line. In other words, they would have to be waybills originating off the layout and terminating off the layout. The thought of generating that many waybills, for through trains which are not switched, was daunting. I might still attempt to do such a project some day, if an efficient way to do so should suggest itself, but in the meantime I decided to experiment with alternatives.
One simple alternative which occurred to me is simply to use regular waybills, from a variety of railroads, but not filled out, that is, blank forms. That way, a quick glance at car sleeves for a through train would show an appearance superficially resembling trains which are switched. By use of Empty Car Bills for empties, the load vs. empty difference could be maintained also. The result would be something like this: 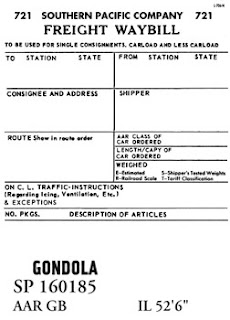 I did try out this approach, but when encountering a car sleeve like this, found myself thinking “this is a mistake,” and sometimes looking on the back to see if the waybill was merely turned around. (Even though it’s my own system.) I’m guessing that visiting operators would have a similar reaction. Then I thought, why not just use a plain card (though still with the usual color codes, pink for perishables, yellow for empties, and white for regular bills). That way, it doesn’t look like a failure to fill out the waybill.
Here’s such a sleeve, representing a perishable load with pink:

But in a way this is even worse. Now you really tend to turn it over to see where the “real” waybill is. So I think this looks even more like a mistake.
My next idea was to try something I’ve seen on a few layouts: the waybills which are for cars not switched are entirely different. For my purposes, these are the “through cars” that won’t be switched on my layout (though of course they are switched in staging). I tried this idea out using a light green waybill, quite different from all other waybill colors:

As you can see, I chose a number of “off the layout” destinations, north (Oakland, San Francisco, San Jose, Roseville, Ogden, Portland) and south (Los Angeles, Colton, Tucson, Tucumcari, El Paso) for variety. Now when these are in the car sleeves, it’s clear that they are a different category of waybill.
This doesn’t seem like an entirely satisfactory solution, because now these cars don’t have prototypical waybill-like documents. Also, this bill looks something like an Empty Car Bill, but in green, suggesting perhaps that it’s a different kind of empty. I will continue to explore ways to deal with this through-car problem, hopefully an improvement over the green through-car bills, although these are effective in the short run. One thing I plan is to try making some complete waybills for through cars, for the destinations and origins I know, such as auto parts, and see how well a partial set works.
I also wanted to try out caboose cards and caboose car sleeves, so that all cars in a train would be represented in a train packet (or a handful  of waybills). Again, I chose a color not otherwise in use for waybills, a light blue. Here’s what they look like:

By the year I’m modeling, most SP divisions, including the Coast, had relegated most wood cabooses to local service, and mainline service was nearly all accomplished with steel cabooses. Thus my car sleeves indicate “road service” for all general-service cars, and “local service only” for restricted cars. I also want to explore assigned cabooses, as most cabooses in 1953 were still assigned to individual conductors. One use for such assignments would be for local trains, which tended to be operated by crews with high seniority, who would likely hold caboose assignments.
These ideas are very much a work in progress, and I don’t regard any of them as final solutions. But they are working all right as interim measures. I hope to post in the future about improvements in these ideas.
Tony Thompson
Posted by Tony Thompson at 10:26 PM