When my layout was in Pittsburgh, PA, and was rather larger and with much more staging, we had operating sessions fairly often, usually with the members of ICFS (for information on what ICFS was, and is, you can read my post at: http://modelingthesp.blogspot.com/2013/07/that-red-icfs-truck.html ). In those days, the layout peninsula, which was home to the towns of Jalama and Ballard, included most of the switching opportunities, though the 16 tracks of staging permitted lots of mainline trains too. For a drawing of the peninsula as it then was, see: http://modelingthesp.blogspot.com/2012/03/survival-from-my-old-layout.html .
With my move to California, it is that peninsula which is now the majority of the layout. As I’ve explained previously (see my discussion at: http://modelingthesp.blogspot.com/2012/05/survival-from-my-old-layout-2.html ), the town of Jalama is now renamed Shumala, and what was previously a freelance short line is now an SP branch. Nearly all of the switching remains as it was, so that sort of operation is equally available in the new layout.
Having accomplished a victory—which is only an interim one, of course—in the “electrical wars,” as previously described (you can find the story at: http://modelingthesp.blogspot.com/2013/08/electrical-wars-part-6.html ), I thought the time might be right for an exploratory operating session. There had been some operating sessions prior to the total rewiring of practically the entire layout, accompanied by totally rewiring my control panel, but an obviously new situation, at least electrically, meant that there were bound to be new challenges.
My brother-in-law, Bill Albrecht, was in town for an anniversary celebration, and since he is a model railroader (albeit of the garden-railway persuasion), I invited him to try a switching problem. I set it up with my usual waybills, which I’ve described previously in a magazine article (see: http://modelingthesp.blogspot.com/2011/02/waybills-3.html ), so that it would require only a fairly simple set of moves. This was because Bill is not used to switching operation in the garden-railway world. But he does use an NCE throttle exactly like mine on his railroad, so he was comfortable controlling the locomotive, and away we went.
He soon figured out the logic of the required switching, and of the waybill system, and went to work. Here he is at the beginning, with waybills still standing up alongside the cars, while he gets the hang of the locomotive behavior. 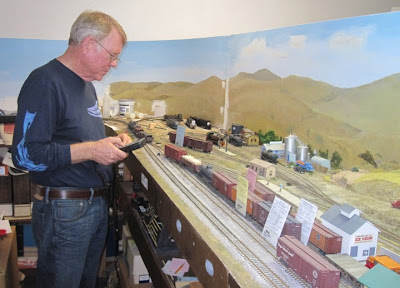 Pretty quickly we removed those waybills and with only some preliminary mentoring from me, he moved through the switching that was needed. My sister (Bill’s wife)  took this photo. 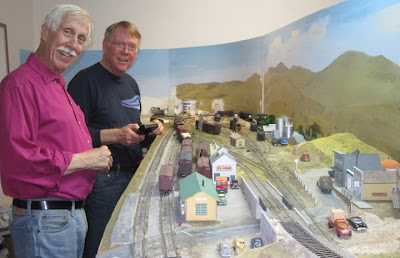 Once the Shumala work was done, he started making up the train for Ballard. As was the case in the entire job, he is using SP Consolidation 2836. 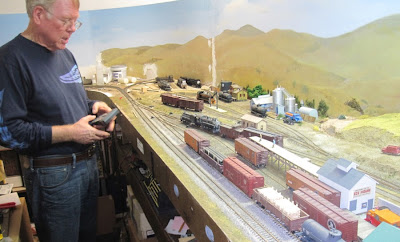 Upon arrival at Ballard, there were some set-outs and pickups to do, before returning to Shumala. Here Bill is using a bamboo skewer as a switch pick to uncouple the caboose. 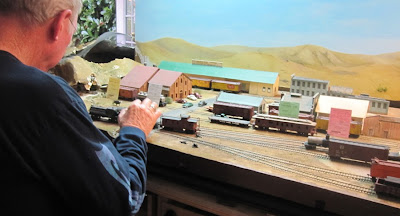 We had fun doing this problem, despite finding a few dead spots (amazing how they surface whenever you operate). They are all marked for attention. And I need to replace more of my Caboose Industries ground throws with the Bitter Creek ones (I described and installed one of these in a prior post, at: http://modelingthesp.blogspot.com/2012/09/electrical-wars-part-3-hand-throws.html ). But this was an encouraging step with the new wiring, not to mention plain old fun.
Tony Thompson
Posted by Tony Thompson at 10:04 AM