Among the planned industries for my layout town of Ballard is Guadalupe Fruit Company. In the prototype area where my layout is set, Nipomo Mesa would be a likely area for stone fruit production. My choice is to model the packing house as located on my SP branch just west of the mesa.
The packing house is to be situated near the depot (as are several packing houses in the prototype town of Oceano, a few miles away). To see what might fit in the available area, I used some surplus Bristol board and mocked up a simple box for the house itself, then a platform to fit the space between spur tracks behind the depot. The pieces of cardboard of the mockup were assembled with masking tape, so they can readily be rearranged, disassembled or replaced. Though not sure if I would want to have part or all of the platform roofed, nor if I like the tapered roof shape on the platform, I did go ahead and mock up a roof which fits the platform. Here is an overhead view. 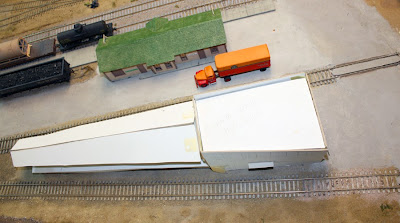 The green roof is the Ballard depot, with a Pacific Motor Trucking (PMT) truck in the driveway. To the immediate left of the depot is the house track, with the freight platform still to be built. At right is Bromela Road.
The intent was to permit as many as four refrigerator cars to be loaded at one time on this platform, two on each side. The photo below shows two cars lined up alongside, though I will probably designate the other side of the platform as the primary loading point. 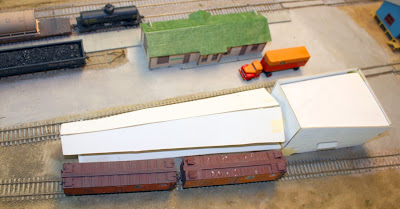 The complementary side view looks like this. The mocked-up platform itself is too high for the car floor height, but the eave height of the roof seems all right. (There is another structure mockup in the background.)

The mockup immediately showed several points that I need to address. As I mentioned, the full platform roof may not be part of the final structure, and indeed several prototype packing house photos show partial rather than complete platform roofs. The platform may also be longer than necessary, since loading only requires access to the car door, not to the entire car length. One response could be to lengthen the main building at the expense of the platform. The obvious next step is to modify the cardboard version of the structure to see if I like it better another way.
Adjustments to the mockup are easy at this stage. I can modify the mockup to respond to my successive observations of each version, and once I feel it is satisfactory, it can be disassembled and its parts used as patterns for the final structure. This is a process I have used in the past for structures which need to fit a particular space, and has worked pretty well.
Tony Thompson