As I described in my previous post on this topic (you can read it at: http://modelingthesp.blogspot.com/2013/08/my-experience-with-steam-in-india-1984.html ), in December 1984 I was in India to participate in ICF-6, the sixth Intrnational Conference on Fracture. Prior to the meeting, my wife Mary and I did some travel within India to see various sites of interest, including Varanasi
At Varanasi, the depot was bustling with steam power, which I had not expected. In just a two-hour sojourn there, all the while wishing I had another roll of film (remember those days?), I saw many steam-powered trains in both directions, and many light engines being serviced.
When I first arrived at the depot, I photographed a pair of passenger engines, with typical red smoke lifters, on ready tracks across from the platform. In the near foreground is a water column of a type seen throughout the Varanasi terminal. 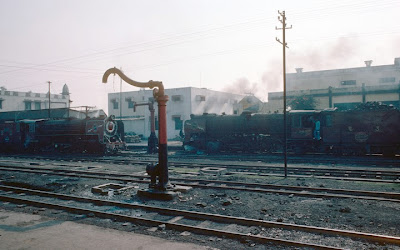 There were also a few diesel locomotives, with a variety of paint schemes. I thought this one was pretty handsome. On the nose, just above the walkway, can be seen the initials “NE,” standing for the North East zone of Indian Railways. 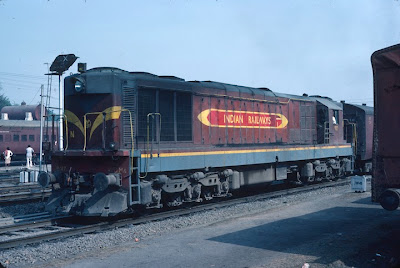 This shot shows a mail train, with a guard van (caboose) behind the tender, just getting underway. Most passenger power had obviously been rubbed down and was relatively clean, including glossy boiler bands. This one’s tender also has the initials NE. 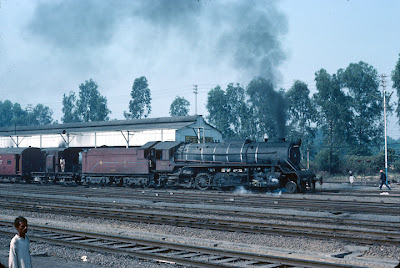 As I was about to leave the depot and return to my hotel, one more train came in, with the typical Mikado power. The engine was uncoupled from the train, then drifted past me, and I got a shot of the tender. Note the NE initials. 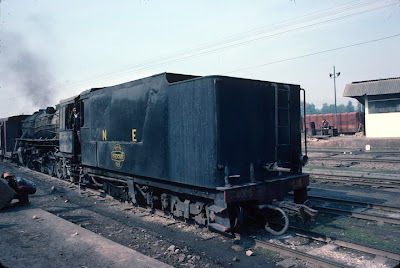 Then I walked up to the head end where a workman had opened the headlight casing, I suppose to check a defect. I liked the silver trim around the smokebox front. 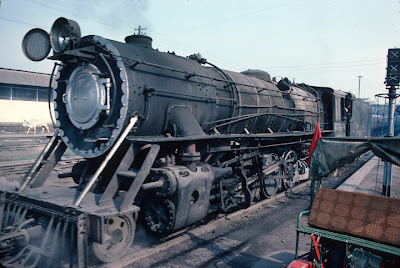 As was the case with my steam encounters in China in 1981, it was a real pleasure for me to see these locomotives working in everyday service. Whether any of them had especially historic value, I have no idea. But it was wonderful to see them going about their daily duties.
Tony Thompson
Posted by Tony Thompson at 8:03 AM