An op session for Ops Weekend

A long-standing Bay Area tradition is to have a weekend event put on by local adherents of the Layout Design and Operations SIGs (Special Interest Groups) of NMRA, and this has almost always taken place on the weekend before the Super Bowl, when there is no particular football to watch. That was the plan again this year, and the event took place on January 28 and 29. All day of the 28th, about 80 people were at the Mountain View Community Center, for a program of talks and discussion (including a talk I was invited to give, on current ideas for model waybills). Here is a photo taken by Bruce Morden of the audience (a few were outside at the layout design consultation). The fellow with his hands up in the back is the event leader, Seth Neumann. (You can click to enlarge.)

On the 29th, a number of layouts around the Bay Area had crews assigned for operation. These were primarily out-of-town people who had signed up to operate. As usual, I hosted four people to operate on my layout as two two-person crews, and we were scheduled from 10 AM to 1 PM. But for me, this was not a routine operating session, because I have been upgrading a number of parts of the layout in preparation for the Bay Rails weekend in March, something held in odd-numbered years in the Bay Area. So in addition to the usual car flow and so on, I was also testing some aspects of the upgrades.
One upgrade being exercised was the use of Frog Juicers for a couple of previously troublesome turnouts. I described that project in an earlier post, which is at this link: http://modelingthesp.blogspot.com/2016/12/electrical-wars-part-12-new-turnout.html . That was the second of two posts describing the project, so it provides a link to the first post. (And by the way, the maker of the Frog Juicer is Tam Valley Depot; you can visit their informative website at: http://www.tamvalleydepot.com/support/whichfrogjuicer.html .)
I also wanted to exercise a few more cars which have not been part of op sessions recently, to broaden my “first class” operating fleet. Inevitably, a few did not perform as desired, and are now on the workbench for correction. But with 52 cars on the layout for this session, many of which were repeatedly switched, and a few of them that were rarely or never previously operated, having a few cars falling short wasn’t too bad.
One of the crews was Bernhard Beck (left) and Lloyd Lehrer, shown here working their first shift at Ballard. 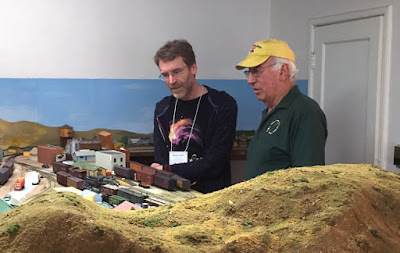 The other crew, here working at Shumala, was Wayne Wood (left) and Paul Chandler. 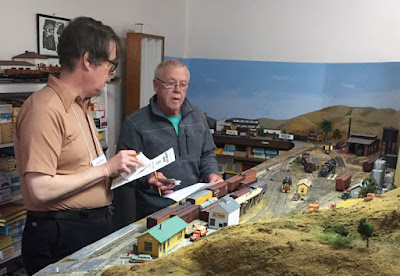 None of these guys had operated here before, so naturally there was time spent figuring out the various switching complications and setting up the successive moves that had to be made. I know they enjoyed the challenge. And Paul Chandler voiced the reality we all recognize, when he said, “This was our first day on this job. Once we’ve done it every day for a few weeks, we will be a lot quicker.” That’s just one of the difference between model railroad crews and prototype crews. But from my perspective, in terms of the layout and the rolling stock, it went pretty well, and just as I had hoped, revealed things that need improvement before Bay Rails.
Tony Thompson
Posted by Tony Thompson at 1:19 PM