I began this series of posts with some background on Richfield Oil Company, with reference to previous posts about bulk oil dealers (see the introduction at: http://modelingthesp.blogspot.com/2016/12/more-bulk-oil-modifying-interstate-oil.html ). In that post, I also showed how I wanted to begin modifying the Walthers structure kit, named Interstate Fuel & Oil (kit no. 3006), for my layout.
The two posts that followed showed some early details of modifying I did to parts of the kit, first the construction of the removable roof to replace the kit's distinctive round roof (the post describing that technique is at this link: http://modelingthesp.blogspot.com/2016/12/more-on-modifying-interstate-oil.html ), with the goal of making a gable roof to replace the round one. The third post then presented some additional description about modifications I made to the storage tanks (you can see that post here: http://modelingthesp.blogspot.com/2017/01/modifying-interstate-oil-part-3.html ).
In the present post, I continue with the roof treatment introduced in the second post. I built the removable roof with Evergreen no. 4523 metal roofing material, which makes a standing-seam roof. I have used this material before to build roofs, for example in the machine shop I added to my roundhouse at the layout town of Shumala (here is a link to the post about that model: http://modelingthesp.blogspot.com/2014/01/shumala-roundhouse-part-3-machine-shop.html ). Thus I know that assembling these roofs is a little tedious and fiddly, getting the styrene strips which represent the seams to line up in the grooves in the roof sheet, but this is one of those cases where patience gets you to the destination.
Once the roof was complete, I painted it and the other roofs in the kit a medium gray, using Testor’s gray primer. 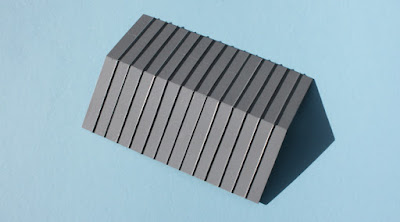 Then I could also complete assembly of the pump house in the kit, using the previously painted yellow walls and blue doors. I will eventually weather this building to a fair extent, since it presumably would not have been maintained as well as the publicly accessible warehouse/office building.

Shown below is that warehouse/office building with its new roof, together with the kit loading docks wrapping around one corner. I still need to add a prominent Richfield sign to the building; the obvious location is the empty wall space on the building end, between the windows. I will also of course add various items to the loading docks, not only some of the oil drums from the kit, but also pallets and boxes. It might also be appropriate to add some advertising signs, for example for Richfield lubricants and gasoline. These are readily available on the Internet. 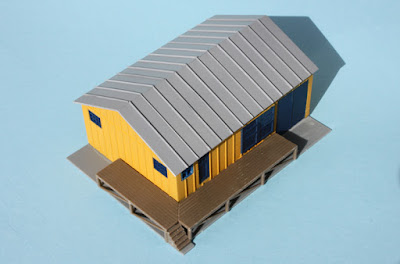 The kit modifications so far are working well for me, and I will report further progress on this layout structure in a future post or two. I always enjoy seeing another of my layout industries coming together, and already look forward to switching cars at this one.
Tony Thompson
Posted by Tony Thompson at 3:04 PM