In Part 1 of this series, I identified the prototype of a partially-completed model freight car I inherited from Richard Hendrickson. It is clearly intended to model one of the Santa Fe’s rebuilds of old FE-Q class 50-foot cars, into all-steel automobile cars, in this case, Class FE-25. (You can read Part 1 at this link: http://modelingthesp.blogspot.com/2017/01/another-hendrickson-car-project.html .) I followed up that post with the start of modeling work to add to Richard’s beginning, by adding the nearly-correct double doors that are commercially available, and will be adequate for this model (that post is at: http://modelingthesp.blogspot.com/2017/02/hendrickson-auto-car-part-2.html ).
(For anyone who does not know, or has forgotten, who Richard Hendrickson was, it might be of interest to read the memorial essay of tribute I wrote after he passed away in June 2014. That essay can be found here: http://modelingthesp.blogspot.com/2014/07/in-memoriam-richard-hendrickson.html .)
Richard had added weight to the car initially, both the usual Athearn steel weight, and also lead strip inside the fishbelly center sill.  So with no need to glue weights inside the car body, I decided to proceed with gluing on the panel roof he had chosen. I attached it with CA. 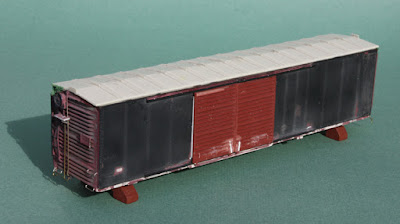 The model in this photo is resting on the temporary truck support blocks I use before it is appropriate to add trucks, and also for support during painting. You can read more about these in a post I wrote about them (it is at: http://modelingthesp.blogspot.com/2014/11/interim-truck-support-blocks.html ).
Since this model began with an Athearn 50-foot automobile car body, with a panel steel roof, one might wonder why the roof was replaced. The reason is that the original Athearn molding, for some reason, has an incorrect number of panels, twelve, instead of the correct thirteen. I showed this in a photo of correct and incorrect roofs in a prior post (see it at: http://modelingthesp.blogspot.com/2018/01/auto-industry-traffic-part-6.html ; scroll down the post). The replacement roof shown above does have 13 panels.
To complete the roof, I will need to add a wooden running board, which is how Santa Fe rebuilt these cars in 1942-43. I have on hand a Proto2000 50-foot wood running board, removed from an SP automobile car so I could  install a Kadee Apex running board (see my description of this project at: http://modelingthesp.blogspot.com/2017/11/small-project-running-boards-for-sp.html ). Because at the time the  cars were rebuilt, Santa Fe still applied non-skid black coatings to car roofs, but not to running boards, I decided to avoid masking problems, and wait to install the boxcar-red running board until after painting the roof black.
The model underframe was partly completed. Richard had added fishbelly center sills with  underframe parts from the Athearn gondola, suitably cut and fitted. He had also added the AB valve in the correct location, as I showed in Part 1 (link in top paragraph, above) and the cylinder. I added the reservoir, oriented transverse to the center sill, as was normal Santa Fe practice.

The brake lever at the cylinder is most of what would be visible on this model, so no other brake rigging is shown at this stage.
As this and previous posts about this model show, Richard had detailed the ends of the car, but not the sides. I will be adding A-Line “Style A” sill steps, and ladders that match the end ladders. By “match,” I mean in rung spacing. On the prototype, rungs on sides and ends were aligned, so ladders in both locations need identical spacing.  Lastly, I also need to install grab irons. The Santa Fe rebuilt these cars with bracket grab irons.
As it happens, I have an excellent source of such grab irons. Years ago, when Richard had become frustrated with the nicely molded but terribly fragile plastic version of bracket grabs, he had the inspiration that a sprue of these plastic parts could be used as “lost wax,” that is, surrounded with mold material, melted away, and then the mold filled with brass. I don’t recall who did the casting for him, but the minimum order resulted in a lot of grab irons. He gave me a handful of the brass sprues, and showed me that he had many times that many in his parts drawer. Here is what they look like (you can click on the image to enlarge it):

Note that there are a couple of bracket grabs for car ends here too. These are pretty easy to install, same hole alignment as on model with the plastic ones. I just drilled holes and installed with CA.
To install the sill steps, I simply drilled into the car side from below, and then trimmed the A-Line steps to give the right amount sticking out. They were attached with CA. Note that, as in the prototype photo, the grabs angle outward somewhat. 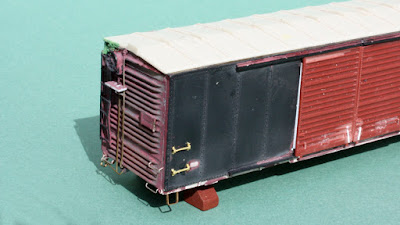 Next comes ladders. As I mentioned, the side ladders must have the same spacing as the end ladders, and rungs are aligned exactly at the same height on side and end ladders. As Richard had already installed end ladders, I need to match the spacing. I haven’t dug into my stash of ladders from various manufacturers yet, but I expect I will be able to find a match. I will provide the answer in a future post, along with finishing up other final details prior to painting.
This model is an interesting challenge, because I don’t know what Richard exactly intended to do, so I just have to use my own judgement on a realistic path to an accurate Santa Fe Class FE-25 automobile car. I look forward to completing the modeling and moving on to paint and lettering.
Tony Thompson
Posted by Tony Thompson at 6:09 AM