How old is my layout?

Some time back, I wrote a short summary of the survival of parts of my present layout, from the layout I had in Pittsburgh prior to moving to California in 1994 (that post is at: http://modelingthesp.blogspot.com/2012/03/survival-from-my-old-layout.html ). I followed up that post by showing a few more photos of various locations around the old layout, as well as some period photos of myself, a few months later (see that post at: http://modelingthesp.blogspot.com/2012/05/survival-from-my-old-layout-2.html ). There isn’t too much more to be said on that topic — except that I am often asked, especially at open houses, how long I have been working on the layout.
That isn’t an easy question. The layout was always conceived of being built in sections, and the oldest section is what is now the town of Shumala, called Jalama on the Pittsburgh layout. That part of the layout was started as a shelf switching design when I lived in Thousand Oaks, California, prior to moving to Pittsburgh in 1977. Yep, that is more than 40 years ago. At that time, the section didn’t have more than a fraction of the track now present, but its underlying structure is indeed that old.
Well, have I been working on the layout for 40-some years? Not really. After settling in Pittsburgh, it was almost five years before the layout at that time really began construction, that is, around 1982, when I got back from a year’s sabbatical leave in England. (I was then employed at Carnegie Mellon University.) Much of the layout was then built in a few years, and though little scenery was completed, I had a long mainline run of the Southern Pacific Coast Route, a mythical short line, the Lompoc & Cuyama, as a connection, and extensive staging. It was located in a basement room that was 16 by 19 feet in size.
The layout, as it then was, enjoyed a portrayal in a story for Railroad Model Craftsman (or RMC) in the issue for June 1990 (pages 64 to 69). Actually, my layout was featured on the cover of that issue, as part of the coverage to promote the NMRA National Convention in Pittsburgh in 1990. That cover is shown below, with a photo taken at the town of Jalama. 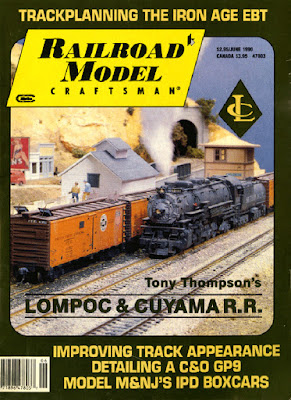 I’m proud to have had my layout on the cover of RMC, and have this cover framed in my layout room today.
Though I couldn’t have known it when completing that story, the layout didn’t progress much beyond what was shown in the article. I had another sabbatical the following year, and then became involved in looking for a new job. And when I found one, at the Lawrence Berkeley National Laboratory and at U.C. Berkeley, we moved into a fairly small Berkeley house with an attic not very suitable for layout construction, and everything remained in storage (in that attic). It wasn’t until 2005, when we moved to a bigger house (with a bigger yard to give scope to my wife’s intensive interest in gardening), that I finally had a good layout space.Even then, it ws two years getting settled in the house before I began to reassemble the surviving layout sections in my new layout room.
So you could say that I did a lot of layout construction, including structures and scenery, from about 1982 to 1990, and then nothing until 2008.Moreover, of the layout peninsula that I salvaged from Pittsburgh, a number of changes had to be made. For example, here is the end of the town of Ballard, farthest from Jalama, as I began scenery work in May of 1990. 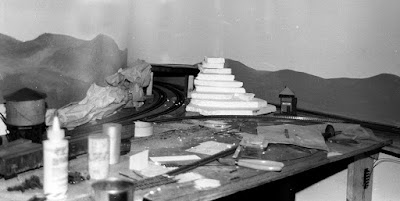 There is a wye at the rear of this area (thus the signal tower you see, just right of center), and a road bridge was being added to disguise the backdrop opening for one leg of the wye. The scenery in this area was made more complete in time for the NMRA National that summer, and as you can see below, I added my Union Oil bulk depot and a California Division of Highways garage (in the distance). Both these industries are still at Ballard, though differently located. 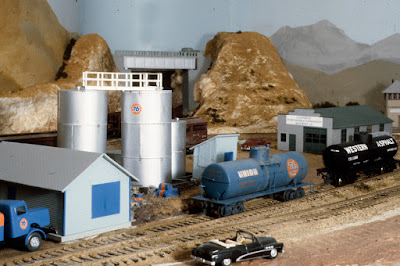 The scenery at rear is more complete, and a bridge is in place over the rear leg of the wye. But the Union Oil tank car paint scheme that you see here is bogus, and has since been repainted black.
These were only some of the changes at Ballard. A view back in the direction of (railroad) west shows a Lompoc & Cuyama train, passing two industries no longer located where they are in this view. 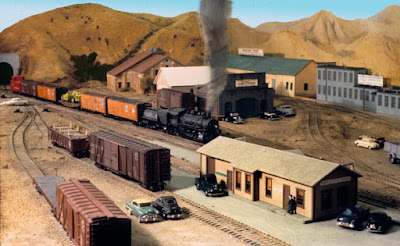 The nearest industry, right behind the column of smoke, is a brass foundry, now at the rear of Ballard, and the building just beyond it has moved over to about where the tower is located in the color photo above. The depot has been repainted from its L&C paint scheme into SP’s Colonial Yellow and Light Brown, and the roof redone as Moss Green. The left foreground now contains packing houses.
So the layout definitely is different than it was in Pittsburgh, and continues to change as it nears completion. And how about that question, how many years of work? At this point, I would add the eight years in the 1980s, to the time since 2008, and make it 18 years total, and some of that was in fact consumed in rebuilding and restoring the parts I had moved. Perhaps 15 years is a more realistic number of actual layout progress time.
Tony Thompson
Posted by Tony Thompson at 9:51 AM