Just now available is an excellent new book from Shade Tree Books. Author David Coscia’s title is, Southern Pacific in the San Fernando Valley, 1876-1996. This is a big book, 480 pages, hardbound in a horizontal format, with approximately 8.5 x 11-inch pages. The cover image is a Rod Aszman painting of No. 60, the West Coast, passing Burbank Tower. 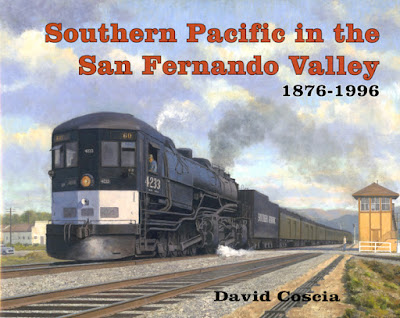 Cover price of the book is $89.95, and among other places, it is available (or will be shortly) on the Southern Pacific Historical & Technical Society web site, at this link: https://sphts.myshopify.com/ . You should also be able to find it at hobby shops and railroad museums that sell fine railroad books.
It might seem like a quite restricted geographical area, but in a way, this frees Coscia to delve into considerable detail. As he did in his 2011 book Pacific Electric and the Growth of the San Fernando Valley, he provides extensive historical information about the development and industry of the San Fernando Valley, which gradually in the 1950s became filled with private homes as Los Angeles suburbs, after a 19th-century beginning as a farming area. Even as late as 1950, the outer (northwestern) end of the Valley remained agricultural, but that was soon overwhelmed by housing developments.
The depth of SP detail is considerable here. Author Coscia has included many accident reports and other kinds of incidents, quite a few of which provide interesting insights into the methods of the time. A number of maps by Jonathan Signor enliven the text. In addition, it’s a pleasure to see the fine photographs of Ralph Melching included, along with numerous aerial photos of the area from different periods. These visual resources really enrich the text.
It is probably unavoidable in a book as dense in information as this one, that a few errors crept in, though none are of great consequence. Only the seriously detail-focused would quail at the identification of a Class P-5 Pacific as an F-5 (a misreading of the photo) on page 197, or mis-identification of the PFE ice plant in the background at Taylor Yard (page 213) as being the diesel shop. As I said, these hardly detract from the overall quality.
I should probably confess to a special intensity of interest in this book, having grown up in the area described and having family history there too. As a young teenager, I often rode my bike down to the depot in Glendale, and when I got a box camera, began to take photos. Below is an example, with Consolidation 2827 on the point of the Burbank Local. They were stopped behind the caboose you can see at right, and the engineer told me the train ahead, No. 831, had a red board and everyone would just have to wait. It’s a better picture than almost every train shot I took in those days — for the simple reason that the subject was stationary! 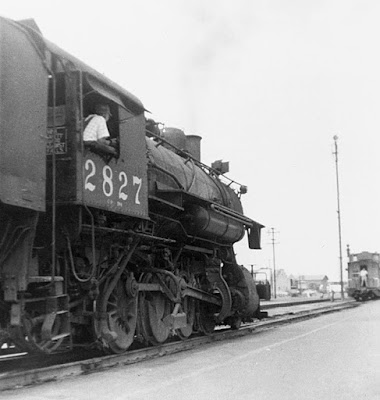 A year or so later, I had the marvelous opportunity of riding a short ways in the caboose of the Burbank Local, but that’s another story.
I really am enjoying this book and have already learned a lot of information I didn’t know. David Coscia is to be congratulated on an excellent book, and I recommend it highly.
Tony Thompson
Posted by Tony Thompson at 2:17 PM