In Part 1 of this topic, I described some of the corporate background and history of the Union Oil Company and its marketing look (see that post at: http://modelingthesp.blogspot.com/2015/12/modeling-gas-station.html ). In that post, I identified the City Classics kit, the “Crafton Avenue Gas Station,” as the starting point I wanted to use. I have also delved into Union Oil in connection with the Union bulk oil dealership that I modeled on my layout (such as: http://modelingthesp.blogspot.com/2015/09/modeling-union-oil-dealer-part-2.html ).
Shown below is the kit as one would purchase it (this one is the upgraded version with more oil company signs — the red notice at mid-package announces this). The previous post showed the earlier kit package without the red notice. 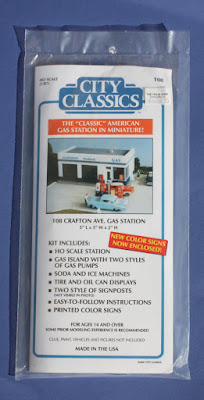 The first problem I encountered in preparing to use the kit is that the footprint of the building only just fits my space on the layout, without adequate (or realistic) space for the gas pump island and parking by the restrooms. Shown below is the actual layout space, between my stock pen at right, and Alder Street at the left. This street corner between Alder St. and Pismo Dunes Road, foreground, would be a classic location for a service station, so I will have to adjust the structure to fit. 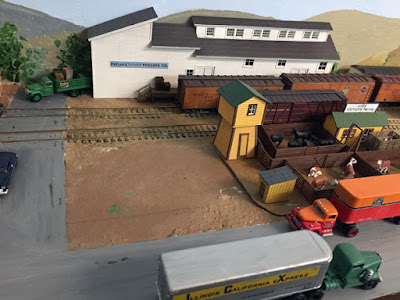 I decided I could readily kitbash the structure to fit. In particular, I decided I could cut down the two service bays to one. The way to do this is to use the panel lines already molded into the kit walls as guides. You can just discern these below (you may wish to click on the image to enlarge it). The critical wall piece is at top left of the photo, where the middle service door would be cut so as to match it up wit the end of the building, in effect cutting away the outer door.

The two arrows show the selected panel line, which happens to lie at the midpoint of the leftmost windows in each door.
This cutting deserves care and that means slow, attentive work, but it is not difficult. I used a razor saw. Note that the only critical part is the front wall, shown above. The back wall also needs to be shortened, of course, but is a plain brick wall and any trace of a cut will not be prominent. Here are my cuts:

I cleaned up the cut surfaces with a file before joining, but minimally so, as the saw kerf has already removed material. The main point is to make sure the cut surfaces are perpendicular to the front of the building. Then I make sure the edges to be glued are well softened with the glue, so that they can be pressed together to squeeze out any irregularities and make a good “welded” joint. Here is my assembled front wall: 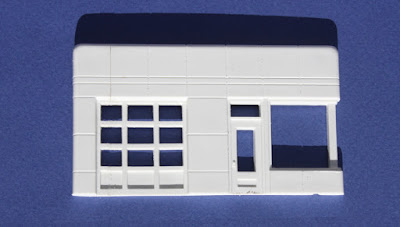 At this point, following the kit directions would mean assembling the building. But since stations like this usually had some kind of color trim, this would be a good time to plan for that. Searching on the Internet for photos of Union 76 gas stations does yield plenty of images, but the decoration scheme varied widely.
Here are the general patterns as I read them. First, I have never found a vintage 76 station with any color trim around the bottom of the building (though many oil companies did paint this area with a company color). The mid-1950s photo below shows an example. This photo is from at least 1954, since that’s a 1954 model Chevrolet. It’s surprising that “new gasoline” is still being touted, as Union decided to call its “high-test" gasoline Union 7600 in 1947. Note also that the pumps are white, with a color halfway up the sides. Color photos show that this side color was always blue. 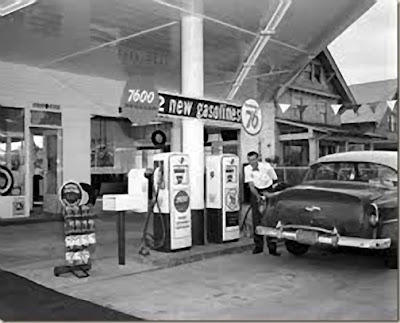 When color accents are seen on vintage 76 stations at all, they are an orange stripe high on the building (including the canopy, if one is present, as in the image above). A fine public-domain 76 image from the early 1950s was used by Wikipedia as an illustration of a gas station (see: https://en.wikipedia.org/wiki/76_(gas_station ); the tower is a feature of some stations built before World War II, but clearly the building is white, with a high orange stripe. 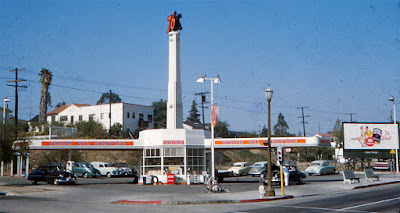 Noteworthy here is the “semaphore” traffic signal, classically associated with the City of Los Angeles in this era.
I will figure on a high, orange stripe around my gas station, and will arrange it before assembling my structure.
Tony Thompson
Posted by Tony Thompson at 3:05 PM