An operating weekend held in the Phoenix, Arizona area for a number of years has more recently been called “Desert Ops.” This was the ninth iteration under that name. I’ve attended before, and this time got to see some different layouts. I won’t attempt detailed descriptions of any of them, but instead will just offer some general impressions.
Four of us coming from the San Francisco Bay Area arranged an extra session in advance of the meeting, so we could operate on Paul Chandler’s outstanding layout in Tucson. Paul models the early 1950s and his layout is centered on Lathrop, California, with a variety of the SP lines in that area. Our session was mostly steam, and the excellent scenery Paul has created was an important part of our enjoyment.
One thing Paul wanted to reproduce on the layout was the exchange of cars and mail between the San Joaquin Daylight and the Sacramento Daylight, which took place at Lathrop. Paul had seen and photographed this event in his youth, and now can carry out the same action on the layout. In the middle of this exchange, I took the photograph below. This is the mail exchange between the RPO cars. Next, three of the chair cars coming from Bakersfield were cut off and added to the train going to Sacramento, while the rest of the original train continued to the Bay Area. 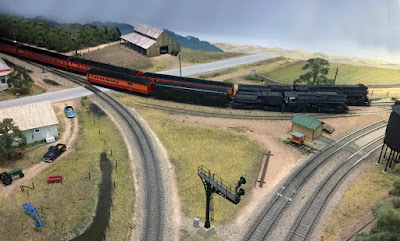 We also had a kind of extra session at the Scottsdale HO club. Like nearly all club layouts, it represents numerous compromises among members’ desires and goals, but is fully scenicked (it’s open to the public for many hours a year) and much of it ran well. Shown below is fellow attendee Al Daumann in the middle of a switching move. You can see in the background the size of the building, which also contains N scale and O scale layouts. 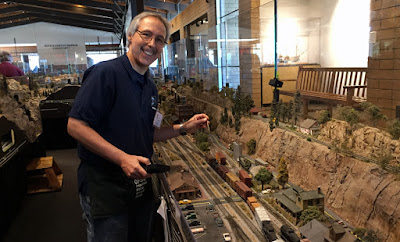 Our first formal session was at Rick Watson’s fine SP Exeter Branch layout, where we had operated before. Rick tries to make sure people do different jobs each time they visit, and this time I got to switch Exeter and Lindsay, a pretty interesting and switching-intensive job. One thing I like on Rick’s layout is that he has used numerous paper buildings made from printouts, in lieu of conventional model structures. For switching, they work fine. Shown below is the large Sunkist packing plant at Lindsay, with Seth Neumann at left and Mark Schutzer in the background doing other jobs, as I worked Lindsay. 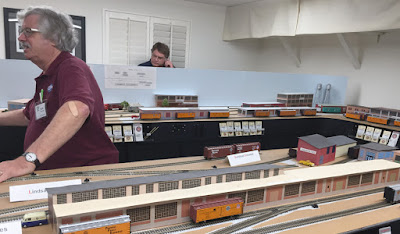 We operated ar Roger Brendecke’s layout next, and the layout recently was largely torn down and rebuilt with wider curves and wider aisles, so much of it was not too suitable for photography. One striking feature is that he has three levels of large yards, with the middle level being a working yard and the top and bottom levels being staging. It accommodates an impressive amount of equipment, and we exercised it pretty well in our session. 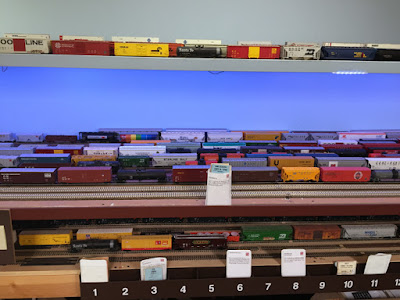 The final session in this weekend for me was at Dave Doiron’s huge layout. I had not been there for four years, and I would be quick to say how impressed I was with the progress on the layout. A lot more is operating, and a lot of very good scenery is in place. I happened to draw the Creamery Branch job, centered around a large creamery structure. It’s shown below, and its oddly angled sections are a faithful reproduction of the prototype structure. The photo backdrop is also shown to good advantage. 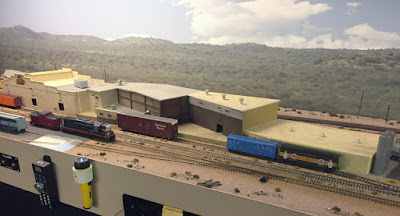 The weekend was fun and several of the layouts outstanding, each in a different way. This is, for me, the great strength of these events, to see how varied are layout designs and implementations, and of course to experience how they are operated. If you haven't been to an event like this, check the listing at the NMRA Operations Special Interest Group, or OpSig, site (the open listing is at this link: http://www.opsig.org/events/events.cgi ) and see if there is one near you.
Tony Thompson
Posted by Tony Thompson at 8:22 AM