Awhile back, I presented four posts with examples of prototype route cards sent to me by Ralph Heiss. Last spring, I met Ralph at an operating session in New Jersey, and he handed me still more examples of these interesting prototype documents. This post presents them. To see the fourth post in that previous series, use this link: http://modelingthesp.blogspot.com/2016/07/route-cards-part-14-still-more-examples.html .
I begin with a few Southern Pacific cards.The card numbered 48 is for SP 49559, a 52-foot flat car with straight side sills, Class F-50-14, delivering a carload of lumber to a lumber yard in Downey, California. Like all the SP cards in this group, it is 3 x 4 inches in size. 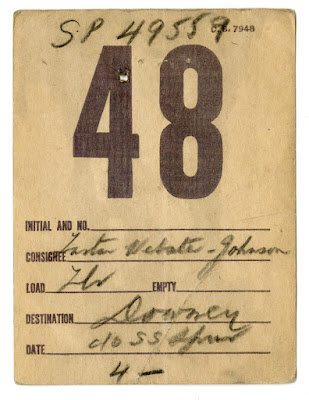 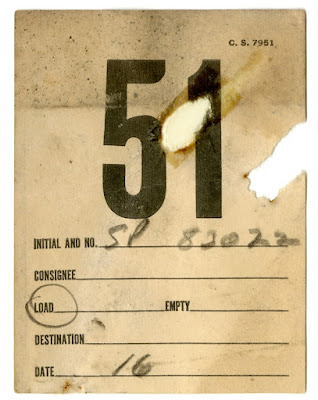 Another example is card 76. It is for empty PFE 40198, a steel reefer of Class R-40-10. It is evidently a transfer car, as its destination is the Pacific Electric’s Butte Street yard. On this card, the date is stamped as March 9, 1956. Note, as with all these SP cards, that the Common Standard document number at upper right is 79xx, where xx is the large number on the card. 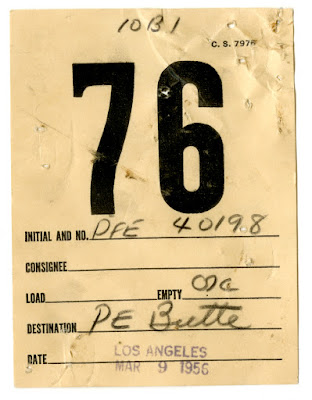 Next I show card 95, which is for another PFE steel reefer, PFE 6027, a member of Class R-40-23. The card is dated February 25, the car is loaded with perishables, and is destined to Chula Vista, California, which is on the Santa Fe, south of San Diego. 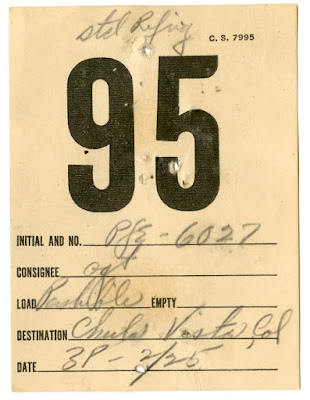 Interestingly, the corresponding Santa Fe card was also retrieved by Ralph Heiss, likely with both of these cards attached on top of one another. This one was the later of the two, as it is dated February 27. Like many Santa Fe route cards, it is 3 inches square, and is a San Diego card. That likely means that the SP interchanged the car to the Santa Fe in Los Angeles, Santa Fe delivered it in a through freight to San Diego, and now a local freight will move it from San Diego to Chula Vista. 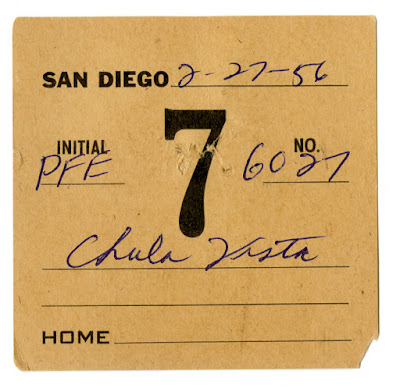 As always, I find these cards fascinating, and thanks again to Ralph for providing them. They are only little pieces of the process of moving freight cars to destinations, but reveal how the process worked. In model form, we try to represent these ubiquitous cards on the route card boards of our freight cars. The ones shown in the present post all have pretty big numerals, and I am experimenting with getting numbers like these onto HO-scale pieces of paper. Not sure it is going to work — but I will report on the effort in a future post.
Tony Thompson
Posted by Tony Thompson at 9:53 AM