Every railroad, large or small, maintains roadbed, and it is a never-ending job. Sub-roadbed may sink, drainage channels may fill with debris or collapse, mud may intrude into ballast, and rail alignment may degrade. Wood ties slowly deteriorate, rail gets worn, even concrete ties have a finite lifetime. One sign of this ongoing challenge for track forces is the storage of new ties and rail alongside the track. Ties may often be seen stored at trackside, since ties deteriorate at varying rates. Rail may be stored in areas requiring relatively frequent replacement, such as sharp curvature areas, but it may also be stored at section houses and other prescribed locations.
Railroads typically have a standard way of storing rail and ties, though of course the “standard tie pile” or rail rack may not always be observed. Railroads with extensive standards of all kinds, such as Southern Pacific with its very many Common Standard (CS) drawings, would be expected to have standard tie piles and rail racks, and in fact they did. You can find the drawings in Bruce Petty’s excellent five-volume series, Southern Pacific Lines Common Standard Plans (Steam Age Equipment Company, Dunsmuir), containing many maintenance of way drawings. specifically in Volume II, page 67. A scan can’t do justice to the original, but here is a copy of CS 1901, last revised in 1930. (You can click on the image to enlarge it, if you wish.) 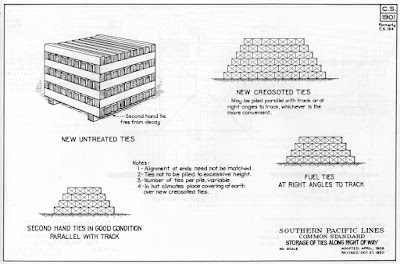 It may be of interest that new ties are stacked differently whether creosoted or untreated. Note at lower right that “fuel ties” are included. These were old, replaced ties suitable only for fuel use, not to be re-used in track. Note also that the number of ties per pile is “variable.” Finally, the piling of new, untreated ties is interesting, because at each pile layer edge, a tie on edge instead of flat helps make air space in the pile.
There was also a standard rack, and rack location, for stored rail, as seen below in a copy of drawing CS 553, a 1950 standard (on page 73 of Volume II). The rail supports are four-foot lengths of second-hand trestle stringers, 8 x 17-inch timbers, but note that they are set on edge, and half-buried. Thus the exposed height of this timber is only 7 inches (see transverse section A-A), so that its surface appearance is essentially a 7 x 8-inch timber. 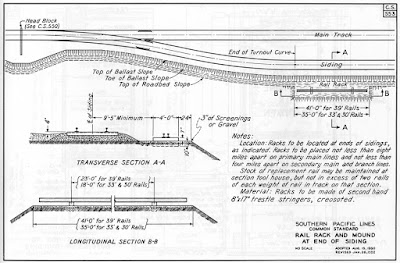 The Notes to this drawing specify that racks are to be located at ends of sidings, but not closer than eight miles apart on main lines. Rail may also be stored at section houses, probably in the same manner.
Both of these standard arrangements are very easy to model, and will make an appropriate addition to scenery in suitable places on my layout. I will show my modeling approach, and layout locations, in a future post.
Tony Thompson