Among the numerous military vehicles that are candidates to be loaded onto the Army’s flat cars (as modeled by Roco) are half-tracks. These were very widely used in World War II by Allied forces, and many survived for use in the Korean War and thereafter. In particular, they remained in use in the U.S. for training purposes. Thus they might well be found on USAX flat cars like the one I have upgraded for use (you can see my previous post at: https://modelingthesp.blogspot.com/2018/12/upgrading-roco-flat-car-part-3.html ).
The military half-track was essentially developed as a prime mover for artillery, and as an armored personnel carrier, and though capable of carrying a lot less troops than a truck, had the advantage of being able to move over fairly rough ground and deliver troops closer to where they were needed, compared to trucks. The vehicle was developed using as many commercial truck components as possible, thus making production rapid and less expensive than a purpose-built military vehicle, and also facilitating training, as the vehicles were driven exactly like a truck.
The photo below was taken by Alfred T. Palmer at Fort Knox, Kentucky, during training of troops in June 1942 (Library of Congress image LC-USE6-D-006148). 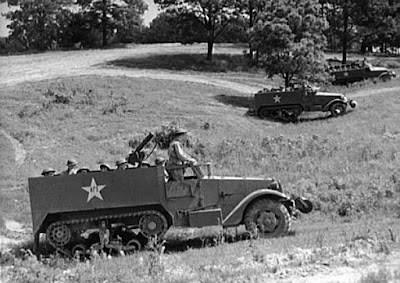 The original idea for usage of these vehicles for personnel was to carry the infantry attached to armored regiments, but they were soon used even more widely for mechanized infantry units. Because of their versatility, they were modified for many additional roles, including as gun, howitzer or mortar carriers, and as machine-gun carriers for anti-aircraft duty.
[There are numerous sources of information about the U.S. military half-tracks. The most informative one I have is Steve Zaloga’s book, M3 Infantry Half-Track 1940–1973 (Osprey Publishers, London, 1994), because it contains a broad history.)
Weighing about 9 tons in the unmodified state, these vehicles would not demand use of heavy-duty flat cars like the Roco model, but nevertheless might be moved that way for convenience. There happen to be some excellent Southern Pacific photos of these vehicles on flat cars, and these show clearly how they were secured for travel. Here is one of those photos at San Luis Obispo, summer of 1943; these are M3 half-tracks of the 7th Armored Division, which had been activated on March 1, 1942. The division would be re-activated for the Korean War and was then stationed at Camp Roberts, on the SP main line of the Coast Division. 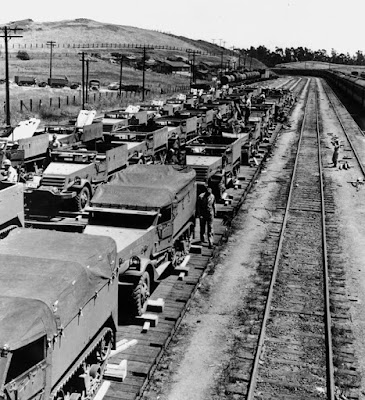 Note here that some of the vehicles have canvas covers, perhaps how they were shipped, but as they are prepared for unloading, covers are coming off. The blocking on the flat car decks is quite clear.
A view from the opposite direction shows the backs of the half-tracks, and clearly there are no additional tie-downs beyond the blocking. No lettering is visible either, except ID plates on the rear of each M3. 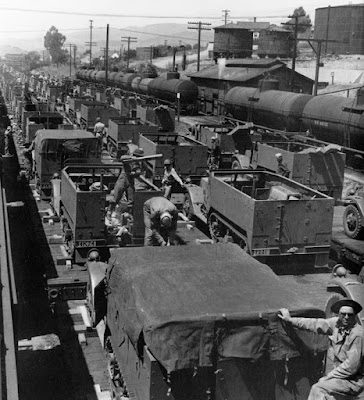 There has long been a Roco model in HO scale of this half-track, offered over the years in a variety of configurations (it’s now sold under the Herpa name). Here is one of them, as it comes from the box (a few details have to be assembled). Obviously tires and tracks need to be repainted, and lettering is needed too. I will return to those aspects when I show the vehicles loaded on flat cars.

The half-track was a distinctive vehicle of the U.S. Army in World War II, used much less in Korea, but still employed in training facilities in my modeling year of 1953. Thus this vehicle is definitely part of the military loads I want to model.
Tony Thompson
Posted by Tony Thompson at 6:02 AM