Too much or too little planning

I have written a number of blog posts about planning as it pertains to model railroading. These posts have ranged from advocacy of planning (you can read for example this post: https://modelingthesp.blogspot.com/2013/10/planning.html ), and not only amplification and extension of those initial ideas, but even to specific ways of making planning work (as described at: https://modelingthesp.blogspot.com/2014/06/more-on-planning.html ), to almost the opposite, when discussing a favorite topic of mine, frittering (for more on that, see the post at: https://modelingthesp.blogspot.com/2018/08/still-more-thoughts-on-frittering.html ).
A related point always to remember is that delay in starting projects sometimes is caused by an excessive perception of the difficulty of the project. Again and again, I have found that it wasn’t that bad, once I got started. So I try always to remember, “it’s not as hard as you think,” and then press ahead with starting the project.
So where does all this commentary lead? Most model railroaders are familiar with the phrase “paralysis by analysis,” (and a few of us are guilty of it). I have learned that it’s a problem that is all too easy to fall into. Some of the foregoing commentary on planning approaches is aimed at getting things moving — because sometimes the alternative is making plans to refine the plans, so that the plans will be extended and improved and organized  . . .  I once had a colleague who, I discovered, made lists of his to-do lists. One can certainly carry all this too far.
Still, I usually maintain a list of layout and other modeling projects, divided into short-term, medium term, and long term, and even with a separate list of “some day,” projects that, over time, I will either discard because they are “a bridge too far,” or that I will move onto one of the time-sorted lists. I am not quite to the point of keeping a list of the lists . . .
But I am always brought back to the recognition that, at least for me, too little planning is usually worse than too much. Too little planning can be a negative when you really needed to look ahead effectively and anticipate needs and problems. Solving those surprises can be more trouble than it would have been to plan how to avoid them.
Nevertheless, there’s another problem. It is summed up well in a T-shirt I have: 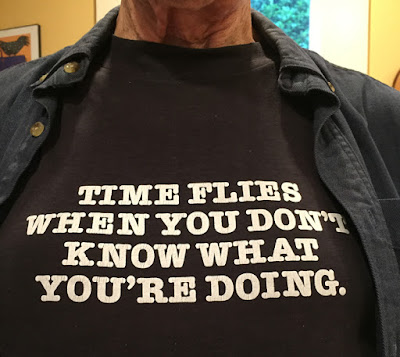 In fact, whenever I realize I am going more sideways than forward on some much-needed project, I will select this shirt to wear on the day I decide to “get going.”
Most of us understand this sentiment perfectly. I just have to remind myself about it from time to time so that it stays in the forefront of my thought process.
Tony Thompson
Posted by Tony Thompson at 10:59 AM