I have just received my copy of a fine new book from Lance Mindheim, which contains marvelous illustrations of his approaches to modeling. These are often at variance with “conventional” scenery and structure technique, so it is interesting and challenging to read and consider his ideas.
I show below the cover of this new 142-page book, which has an 8.5 x 11-inch page size. It is available from several sources on line, including directly from the author at https://lancemindheim.com/book-store/ ; I recommend you buy it directly from him, as that way he gets the most revenue (as compared to, say, Amazon). 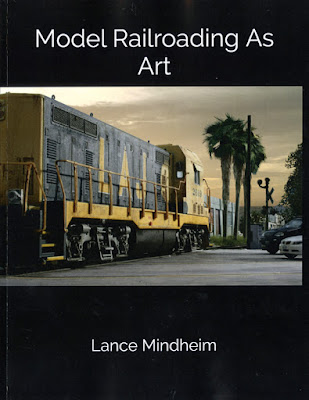 The book is evidently self-published, and of course there is nothing wrong with that. But it does mean that the book is less available through normal commercial channels. To repeat, I urge purchase directly from the author.
First impressions: the book is very nicely illustrated, and if you have seen Mindheim’s articles in the model press, you already know he is a skillful photographer. And having visited Mindheim’s layouts, I know that these photographs effectively depict his work.
On the other hand, a friend of mine who is a free-lance book designer (but not a “train guy”) looked through the book and remarked that it is, as he put it, “typographically clunky,” and I understand what he means. One doesn’t often see key statements neatly put into boxes any more (that was briefly a design fad about 25 years ago), nor emphasized sentences underlined (instead of italicized); underlining was the typewriter way of suggesting italics, since the machine had none.
But these aspects are really superficial in terms of the strength of the content, and shouldn’t discourage you from involving yourself in the book. It doesn’t have chapters as such, but begins with an introductory section, with “Why?” as its title, that asks whether our goals in model railroading have been as well thought out as we believe. It’s well worth reading and pondering before going further.
The main part of the book is called “Creating It,” and delves into many aspects of layout planning, in the sense of deciding what you want, and how to accomplish it. It’s compact but wide-ranging, and I often found myself re-reading something and thinking about it further.
In the course of the bulk of the book, Mindheim has a great deal to say about how model railroads look, and how they can be made to look more realistic. An example of his suggestions is shown below (this is essentially page 71), illustrating his point that selective compression can distort how a scene looks, and we are often better off to choose a smaller element, “cropped” from the desired scene, instead of over-compressing it. 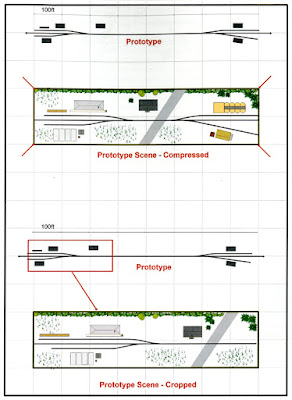 He emphasizes many aspects of proportion and positioning which will be familiar to anyone who has taken an art or design course (if they remember the course, that is), but will be revelations to many model railroaders. And his insights into putting a focus or an emphasis in scenes, with a more mundane background surrounding it, are certainly effective design ideas. I show below one example (from page 75), of an interesting and eye-catching structure with fairly plain, mundane ones all around.

Some may object that a modeler reproducing a prototype scene does not have the luxury of taking an artistic approach. I would disagree, and I’m sure Mindheim would too. We always have to compress space to some extent, and we often “edit,” that is, choose what to leave out. How to do those things most effectively is exactly what this book is about.
I have really enjoyed looking through this book and thinking about many of Mindheim’s points. I think almost any modeler would benefit from spending some time with these ideas. Or to put it another way, don’t delay! Buy The Book!
Tony Thompson
Posted by Tony Thompson at 7:05 AM