The title refers to “Western Oregon Ops,” an operating weekend event in the area of Portland and southward. It was held during June 12 to 15, with about 70 attendees. This was the first time I had attended, and I enjoyed the fine layouts that I was assigned to operate. I was somewhat familiar with the area, because we have a son in Portland, but the layouts were all new to me. I’ll just say a few words about each of them.
The first layout I visited was a “bonus session” on Wednesday, June 12, before the event officially began. It was at Jay Becker’s layout, called the Tillamook, Bay City and Garibaldi. I worked the Tillamook Paper plant and the Bay City harbor area. This is a switching intensive layout, with very nice industrial buildings, and everything ran very well. I especially liked the harbor warehouse at Bay City, shown below, with an incoming car barge at left. 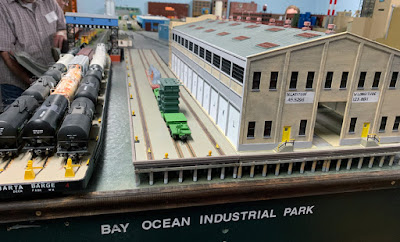 My first layout the next day was Jerry Boudreaux’s Santa Fe (Pasquinel Division), in a large dedicated building. Still under construction in some areas, there is already some spectacular Arizona mountain scenery, as I show below. This largely freelanced layout is quite large, has several interesting switching areas and a large yard, and moves plenty of long trains. All in all, a very nice experience. 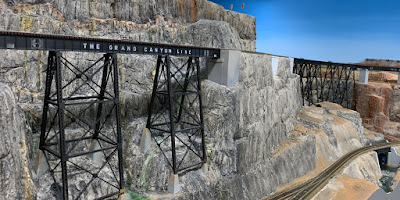 That evening, we visited Chuck Clark’s version of the Southern Pacific Modoc Division, substantially freelanced but with excellent switching locations and fine scenery on a big, double-deck layout. I worked the White Line switching job, and really enjoyed it. The view below, of one end of White Line, also shows an example of the fine backdrops. 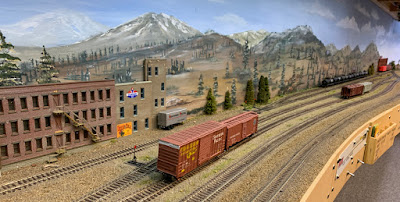 Next, I was assigned to Gene Neville’s version of the SP Modoc Division (which he calls the Great Basin & Pacific), quite different in appearance and style from Chuck’s, though less complete scenically at this point. One exception was the excellent town of Gomez, which you see below with the local freight I operated, doing some switching. The sagebrush is really nice! 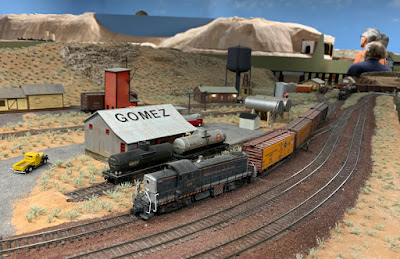 There were layouts available for visit during an open-house period, and I particularly enjoyed Tom Dill’s Ashland Subdivision of the SP. Tom was a locomotive engineer for SP in his career, so knows well what railroad property looks like, and you can certainly see it in his layout. It is simply excellent scenery in a modest-size layout. Below I show a perspective of his version of Ashland in the transition era. 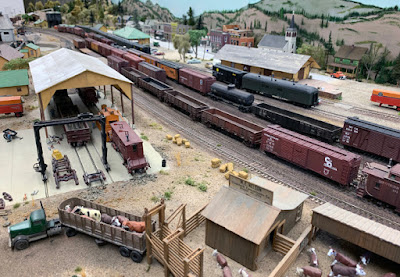 The last layout I operated was Bill Decker’s very large Cascade Subdivision of the SP, set in 1984. The track is nearly all installed, though most areas have only the beginnings of scenery. But the operation was most impressive, with immense staging areas and a very long run for mainline trains. This is already quite a layout and can only get better as scenery and structures arrive. I worked one of the switch engines at Eugene Yard, shown below from the east end. The area in the photo is only one part of the layout, which gives some idea of its size. 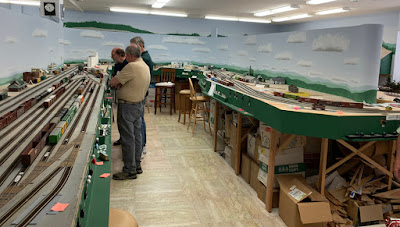 This was a very nice, well organized event,  and I truly enjoyed every layout that I visited. I will look forward to attending WOOPS in the future. But this presentation of particular layouts isn’t just to tell you about the WOOPS event. I hope it might suggest to you that you seek out and participate in operating events in your area. You will see and operate layouts you might not otherwise ever visit, and you are pretty likely to have fun doing it. I know I always do.
Tony Thompson
Posted by Tony Thompson at 11:22 AM