In Part 1 of this series, I showed close-up photographs of prototype car ends to illustrate what was needed to model correctly the reverse-Dreadnaught end used on Southern Pacific’s Class G-50-20 drop-bottom or GS gondolas. I also showed my basic approach, to modify existing commercial ends of the Improved Dreadnaught style to create a reverse Dreadnaught. (That post can be viewed at: https://modelingthesp.blogspot.com/2019/06/modeling-southernn-pacifics-class-g-50.html .)
Part 2 of the series showed progress with the modeling, getting the modified Detail Associates ends to fit onto a Red Caboose car body, and installing them and adding corner cover plates. This is the majority of the modeling work for this conversion. (Consult that post at this link: https://modelingthesp.blogspot.com/2019/06/modeling-sp-class-g-50-20-part-2.html .)
The present post completes all model work and then addresses paint and lettering. The last of the modeling challenges for this model car body is the brake step. Red Caboose provides a clunky styrene part intended to represent the metal-grid brake step on the prototype (though it hardly does so). I replaced it with an etched metal brake step that comes with Plano etched-metal running boards. 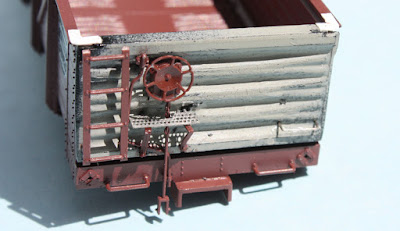 You can see that I also used the kit support pieces for the brake step, modified to fit with its location. Still to add in this view are the drop-door operating rod handles at each sill corner.
A detail requiring caution for the less-experienced modeler is the operating mechanism cover on the car sides, what the kit parts list calls a “side mechanism cover,” part no. 20. Here is a close-up of the prototype to show the correct orientation, which the kit does not clearly show you. It’s the circular-shaped bulge above the sill step: 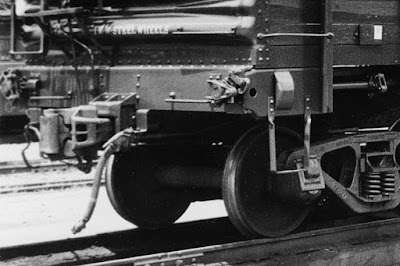 After this, the main remaining challenge is painting and lettering. The kit is factory lettered with the right kind of scheme for the prototype Class G-50-23. But as it happens, Pressed Steel Car Company delivered the G-50-20 class that I am modeling with an obsolete paint scheme. The photo below, a detail of the same view from the beet-loading set taken at Cooper, California (SP negative N-1672-15), included in Part 1 of this series, clearly shows the initials and car number in the first full panel at left. (You can click on the image to enlarge it if you like.)

The capacity data also were placed in that first full left panel and in the adjoining panel, as you can see here.
Southern Pacific had discontinued periods in its reporting marks in 1931. And the spelled-out road name had been substituted for initials in 1946. How that information failed to reach Pressed Steel Car, for cars that were manufactured in 1948, is certainly not clear. But that’s what the cars looked like. Thus we cannot save the kit lettering, but have to start over.
I airbrushed the car with Star Brand “SP/UP Freight Car Red,” paint no. STR-30. For decals, I used Microscale set no. 87-911 (“Southern Pacific Single-Sheathed Wood Box Cars”) for the car initials, the car number, the 1-inch stripe below them, and the end numbers. Finally, for capacity data and the class number, I used the very valuable Champ “Super Set” SHS-144, which will do several classes of SP GS gondolas.
Here is the model, freshly lettered. It still needs reweigh and brake service dates, along with weathering, and of course addition of trucks and couplers. It is supported on my “interim truck support blocks,” an idea described in a prior post (see it at: https://modelingthesp.blogspot.com/2014/11/interim-truck-support-blocks.html ). Compare the photo just above.

I added Kadee no. 58 couplers and Kadee trucks; the trucks had view blocks added to help conceal the thin springs (see my blog post on this subject, which is at: https://modelingthesp.blogspot.com/2019/06/improving-model-freight-car-trucks.html ).
Weathering was with my usual acrylic washes, following a coat of flat finish to cover the lettering. This car is only five years old in my modeling year of 1953, so is not represented as terribly dirty. Lastly, I added a few chalk marks and route cards. Here is the completed model.

I should also show an end view, since the ends were the entire motivation for the project in the first place. Here is the A end reverse Dreadnaught as completed:

I have had this project in mind for some while, and frankly wasted a lot of time trying to use car ends that I thought would be “easier” to modify than the Detail Associates ends. When I just gave it at try with the DA ends, it went pretty smoothly. I’m glad to add this car to my SP car fleet, and will probably do at least one  more car of this class, to balance all the G-50-23 models I already have.
Tony Thompson
Posted by Tony Thompson at 9:02 AM