Most modelers interested in freight cars are aware that, starting in 1956, Southern Pacific renumbered almost all its freight cars into a new system, largely with six-digit numbers. The new system was first promulgated in late December, 1955, and it is possible that no cars received the new numbers until 1956, thus the usual name for this, the “1956 renumbering.’ Evidence from Official Railway Equipment Register (ORER) issues is that the process was virtually complete by the end of 1958.

This renumbering is one of several changes in SP freight car practice that make a “great divide” in car appearance in the mid-1950s. The other major one is the introduction of sans-serif road names in large letters, reflecting SP public-document style after World War II. Thus one can compare a box car like the Class B-50-23 example shown below (Pullman photo for SP)

with a post-1956 repaint and new car number like this one (SP photo), also Class B-50-23; the round circle-and-bar emblem was retained until 1957. Subsequently, the circle-and-bar was discontinued, and the large sans-serif road name moved to the right of the car door.

In my five-book series entitled Southern Pacific Freight Cars (Signature Press), I gave examples of all the car renumberings, class by class (more on that in a moment).

But SP had already realized, by the fall of 1948, that five-digit car numbers simply were exhausted. That fall, orders of both new 40-foot box cars, and 53-foot gondolas, were delivered with six-digit numbers. Between 1948 and 1956, more and more car types began to receive six-digit numbers (for example, flat cars after 1949, hoppers and covered hoppers after 1951). But the apparent “system” underlying these car numbers was entirely replaced in 1956.

A single-page summary was released on December 23, 1955, by the Office of the Superintendent of Motive Power (which also oversaw rolling stock), and I show this below. (You can click on the image to enlarge it if you wish.) All this information, of course, is in my five-book series. 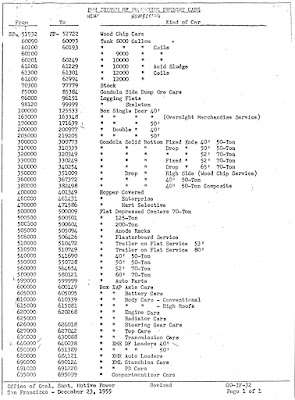 This was followed a few days later by a nine-page document giving the details for every class of freight car then in existence on the railroad. I show below just one example, page 3, for solid-bottom gondolas. 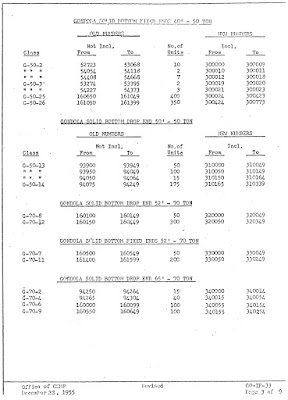 In addition, a similar document, seven pages long, was released in early 1962 when T&NO freight cars began to be incorporated into the SP and its system numbering. That information also, of course, was included in all the relevant parts of the five-book series.

All this is usually well-known for transition-era SP modelers. For the modeler who does not specifically model SP, this kind of information is important in creating accurate SP freight cars for whatever period is chosen, especially for the pre-1948, pre-1956 or post-1958 modeler. Car numbers in particular are distinctive markers of the era in those ranges of years, and realistic modeling calls for having the right kinds of car numbers for the period chosen.