Over the years of this blog, I have posted any number of reports on layout progress, and projects of various kinds, some in considerable detail. But the older ones naturally are not well remembered, even by those who read them when they were first posted. Accordingly, because I am often asked questions about the background of the layout, I have decided to provide summaries of some of the bigger projects. To read the preceding post in the series, go to: https://modelingthesp.blogspot.com/2022/08/layout-origins-part-2.html .

To follow up on that previous post, giving some of the earliest work on my town of Ballard, I will focus on the large hill at one end of the layout. Moving the layout sections from Pennsylvania to California basically went well, but the scenery did suffer. To show just how that hill had survived the move, the view below, looking down into that hill, perhaps shows the dimensions of the challenge I faced to restore it. 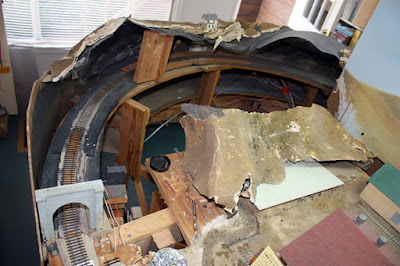 You can see in the view above that the top of the hill, and nearly all of the near side (which I call the “back” of the hill) was missing. At right center in the photo is a piece of the bottom of this hillside, though it is not in correct location. The tunnel portal is just resting in place, and has not actually been installed.

The hilltop is missing above, but I did save the piece that was cut off. Problem was, it was just hardshell without support. I decided to install a new support of screen wire, as is visible below.

I then stiffened and smoothed the screen with a couple of layers of the Woodland Scenics product Plaster Cloth. When that had set, I added contours using Sculptamold paper mache, as seen in the photo below. The tool here is a putty knife. 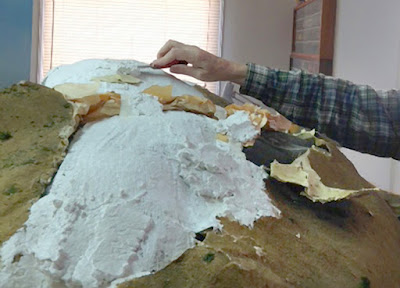 While the Sculptamold was still soft, I enlisted my younger son Sylvan to help me in setting the old hilltop piece in place. That’s him at right. You can see that it pretty much fit where it had originally been. I was then able to patch all around the perimeter of the old hilltop and restore the contour. 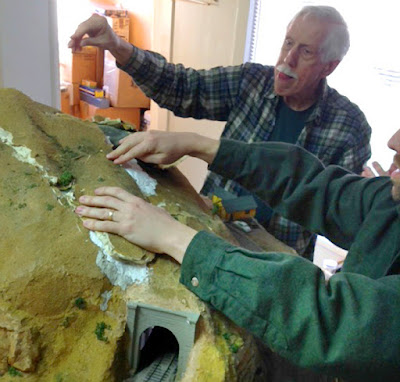 There is a more detailed description of this entire process, which you can see at: http://modelingthesp.blogspot.com/2013/12/repairing-ballard-hill-part-3.html . 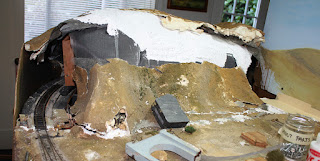 The piece of lower hillside, visible in the top photo of the present post, has been installed at the hillside bottom, but a great deal of hillside shape remains to be created, along with the entire tunnel portal area; the portal rests in the foreground.

For completion of this hill, and its role on the layout, I will return to description of the project work in a future post.