In the previous post on this topic, I showed photos from the 1980s of the earliest work in constructing my layout town of Ballard, concluding with what it looked like when the layout was dismantled for moving to California. You can read that post here: https://modelingthesp.blogspot.com/2022/06/more-on-layout-origins.html .

I should also repeat that the track arrangement in Ballard was designed, from the beginning, as a virtual copy of Terry Walsh’s layout town of West Agony (see specifics here: https://modelingthesp.blogspot.com/2018/06/my-ballard-track-arrangement.html ), because of its versatility as a switching location.

Below is one of the photos that didn’t make it into my cover story in the June 1990 issue of Railroad Model Craftsman, showing a freight train of the Lompoc & Cuyama (as the railroad was then known) approaching the Ballard depot. The two industries just above the locomotive are still located in Ballard, but not in this location. The large hill at left would be partly demolished in the move, and later replaced. 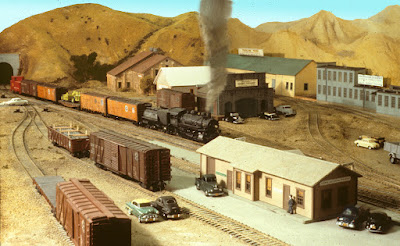 The layout parts that were saved from Pittsburgh were in storage in a couple of places, from 1994 until we moved into a second house in Berkeley in 2005, a house that had room for the layout. As the layout was being re-assembled, the Ballard track board (3/4-inch plywood) was simply on edge alongside the layout. Even now, this photo startles me a little. 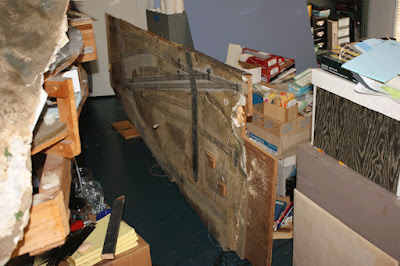 As I showed in an earlier post, having built my staging transfer table, Ballard could be put in place (see: http://modelingthesp.blogspot.com/2011/09/ballard-2.html ). Here is a photo of my staging as it was built, before Ballard was placed on top of it. Notice the limited extent of the backdrop, also salvaged from the Pittsburgh layout.

With the help of my son Cam, we lifted the Ballard track board and placed it onto new supports above the staging. Here you see it about to be put in place. My wife took the photo. 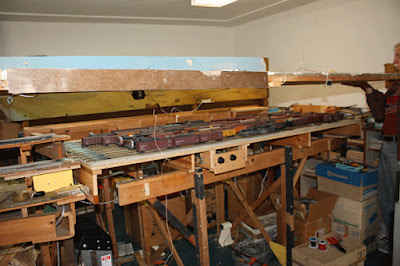 Of course there were no buildings in place, as I rarely glue a structure to the layout. All had been removed and carefully packed for moving when we left Pittsburgh. Below is a view into the Ballard scene right after placing the track board, with two of the salvaged building simply set in place. (Both needed repair). Also note the gap at the bottom of the backdrop. This was to prove a challenge. 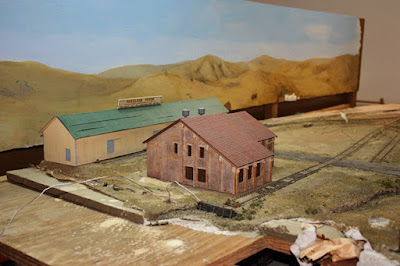 This was a somewhat discouraging time, seeing how much needed to be repaired, and I had to also re-connect the track leading from the mainline level up to Ballard. Below you see that project being completed. A few more of the Ballard structures, and a few freight cars, have been set in place, but extensive scenery repair was also going to be needed. 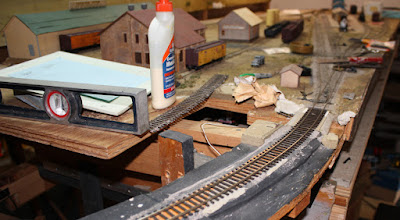 What I’m not showing directly here is the state of the large hill at the end of the layout (see top photo in this post). This had been sliced off to permit moving the end section of the layout, and now had to be entirely recreated. I will summarize all that in a future post.