As anyone knows who operates a sizeable fleet of model freight cars, from time to time something goes wrong and a car is pulled off the layout for upgrade or repair. It may, of course, merely be a task of replacing a lost sill step or re-installing a coupler, but sometimes it is a more demanding task — and gets put off. Recently I noted that my shelf of “ailing” freight cars had grown, and set out to find what was needed to get them back in service.

It turned out that a bunch of them were brass freight cars of various origins. One of the ongoing problems with such cars can be (isn’t always) coupler box attachment provisions. Brass models often come with a set of metric screws that can secure a Kadee coupler box. That’s a simple attachment.

But not always. I recently repainted an old Precision Scale tank car, and found that the single screw hole in the coupler box pad was a very small (and missing) metric screw. I could simply have added such a screw from my own stash, but its head was too small for the hole in the Kadee box. I could have made a washer, but decided instead to simply drill out the small hole and tap it for a 2-56 screw.

I then discovered that the frame was bent, and had to gently straighten it so that coupler boxes at both ends rode at the correct height. When all that was completed, here is the underbody (I left the coupler box screws unpainted for the photo so they would be visible). Note also that I had to add washers atop the trucks, as the car sat too low otherwise.

Here is the complete car, in its new SHPX paint scheme, depicting a lease to the Western Chemical Corp. of Los Angeles. It’s a nominally 8000-gallon car. Route card and placard also visible. 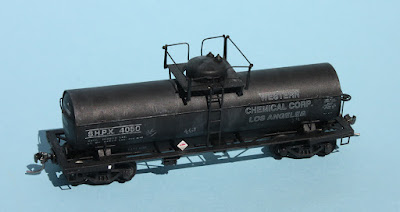 Another of the issues frequently encountered with brass freight cars is the annoying method of truck attachment. I’ve mentioned this in previous posts (see, for example: https://modelingthesp.blogspot.com/2012/12/small-modeling-project-brass-tank-car.html ), and also showed the solution(s) I have used, particularly replacing the truck screw that came with the model, with a metric screw of the same size (you can find that description at: https://modelingthesp.blogspot.com/2020/09/those-pesky-truck-screws-for-brass.html ).

I’ve never understood the attraction (to manufacturers) of this kind of “sprung truck screw,” unless it’s to hold trucks aligned for easy placement in display cases. It certainly does no favors for these cars in operation. At one time, I tried to find softer springs, reasoning that less force pressing the truck bolster against the car bolster should make truck swing easier. I never really got a good result, and now just snip the original springs in half (or entirely replace the shouldered original truck screws, as I described in the post that is cited in the preceding paragraph).

But even these measures will not solve all performance issues, especially for models from what’s called the “middle age” of brass models. That usually means between the first age of durable, somewhat clunkily detailed models that operated well, ending around 1975, and today’s third age of beautifully detailed models with good quality operation — and steep prices.

In the “middle age,” brass production seemed to be oriented exclusively to collectors, and not only collectors, but collectors who rarely if ever took the models out of boxes or display cases, and certainly never operated them. The common side effect was appalling trucks, which did look like trucks but rolled like sleds.

Trucks like that simply have to be replaced if the models are to be operated on actual layouts. I have a few in my fleet, models of prototypes that I like to include but simply could not possibly operate with their original trucks. I put those trucks back into the original box, so that whoever acquires them someday when I’m gone and wants the original trucks, will have them with the model.

For replacements I use a variety of trucks. If I know what trucks the prototype car had, I prefer to use a Tahoe Model Works truck of the same design, since they are accurate representations of specific trucks, roll well, and (unlike some trucks out there) have the correct height. I also have a stash of plastic truck sideframes which, with decent wheelsets, can represent a more generic “AAR truck” if needed. There are examples of both in my fleet.

As a single example, below is a W.A. Drake model of a Southern Pacific 8000-gallon tank car (dome walkway only on one side, typical SP practice). Nice, accurate model, but unlike other Drake brass tank cars I have, this one’s trucks simply could not keep the wheels all in the horizontal plane. That might be stickiness in the bolster ends, or something. But whatever it was, I just couldn’t get it to stop. Easy fix, replace those trucks. 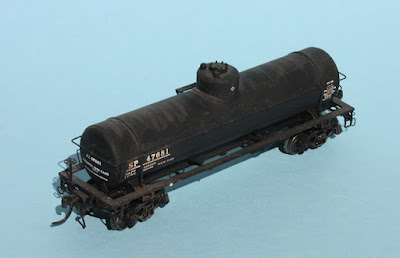 As should be evident from the foregoing, I expect and demand that my model freight cars operate properly. I am not collecting a display case of beautiful models; I am exercising a fleet of working freight cars in layout operations. That’s part of achieving one of my layout goals: to reproduce the SP railroading of my layout’s locale and era.