A UP automobile car, Part 2

This post continues an account of building a Proto2000 kit for a Union Pacific 50-foot automobile car, particularly the changes needed to the model that are not contained in the kit directions. You can read that post here: https://modelingthesp.blogspot.com/2022/04/adding-up-automobile-car.html .

Meanwhile, I did my usual procedure, drilling and tapping the underbody to accept 2-56 screws for both the trucks and the coupler box. And the rather poor Proto2000 coupler box was discarded in favor of a Kadee box to house the No. 58 coupler.  The wheelsets have the “fat” wheel treads, but since this is essentially a “mainline” car, they won’t be particularly visible on the layout. 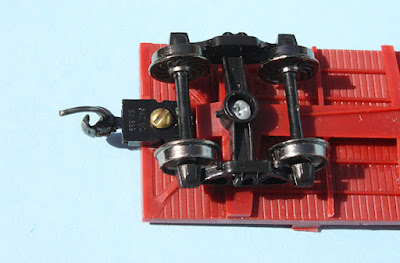 Next, I began adding details to the car side: doors and ladders. But before going too far, I needed to face a complication: the UP cars had the door track extend across the tabs I’d already made (in the prototype photo in the previous post, link in the first paragraph above, look at the side sill profile to the left of the double doors). After experimenting with ways to make this fiddly detail, I decided not to worry about including it. Again, it’s going to be a “mainline” car.

Beyond that issue, details were attached entirely by kit direction, until I came to the running board. I decided to use one of the beautiful Kadee 50-foot grid running boards. This class of cars was not built with that type of running board, but after World War II, Union Pacific was active in upgrading running boards to steel grid types, usually Apex like the Kadee part. One welcome feature of these boards is that they already have very nice corner grab irons installed. I attached the running board with canopy glue.

In the photo above, it’s obvious that the sill steps haven’t been added, just waiting until the underbody was mated to the car shell. That prevents the sill steps from being the “outermost” car parts during installation. Though good-looking, these are very thin and thus fragile parts, and I fully expect to be replacing them with A-Line metal steps after a few operating sessions.

Another issue is route card boards. On this class of UP box cars, they were installed on the bolster end at the left of each car side (you can see them in the prototype photo in the post cited in the first paragraph, above). I used a small styrene strip to represent these. Once the route card boards installed and painted, and the steps were installed, I gave the entire model a coat of flat finish, preparatory to weathering.

My weathering method, using acrylic washes is well described in the “Reference pages” that have links provided at the top right corner of this blog post, for anyone desiring more information. For this model, my first decision was to indicate some paint failure on the roof, a common occurrence with galvanized roof panels, to which paint did not stick well.

Prototype photos show that paint failure on galvanized roofs begins at sharp edges, such as raised panel edges and roof ribs, then spreads. I have tried to reproduce that. I brush-painted Tamiya “Light Sea Gray” (no. XF-25) in irregular patches, inspired by various prototype images. Below is a roof shot, showing how this “paint failure” representation looks, after weathering.

Below is shown the same side of the model that you saw above, after weathering, and addition of reweigh and repack stencils, along with some chalk marks. As the paint scheme would be some years old in my modeling year of 1953, the car is moderately dirty. 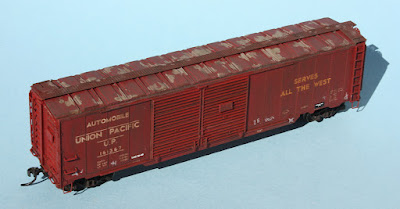 This will fill out my fleet of automobile cars nicely, cars that I operate on the layout in through trains between Los Angeles and the Bay Area (loaded one way, empty the other). It will probably show up in the next operating session!