In Part 3, I showed the completed body (superstructure) box, and the completed attachment of underframe parts and brake detailing, for this model of a plywood-sheathed PFE car of Class R-30-24. (To see that post, use this link: https://modelingthesp.blogspot.com/2022/07/pfe-class-r-40-24-plywood-car-part-3.html ). Note I have recognized that the old-design underframe on this car makes it a 30-ton car, not a 40-ton car, thus Class R-30-24. Now it was time to detail the body.

I began by adding grab irons. PFE used simple bolted grab irons on wood-sheathed cars, so I used Westerfield 18-inch brass-wire grab irons for this car, attaching them with CA. I also added the fan shaft hubs and door hinges, black styrene provided among the parts I got. Then it was time to brush-paint the side sills and the door latches black.

Next I attached the side and end ladders. Not all modelers realize that these ladders on the prototype were arranged so that the rungs on both ladders were aligned. You can understand why if you picture a brakeman having to step around the corner, from one ladder to the other. And of course this means that the two ladders must have identical rung spacings.

Below the car body is shown with the above-listed additions and painting, along with the ice hatches.

Next came completion of the B-end details. As with the ladders and other details, these were attached with canopy glue. Once that was done, I decided to proceed with lettering. For this, I mostly used the outstanding Microscale set 87-501, with Dick Harley’s excellent artwork. But I needed parts of the previous (pre-1946) paint scheme, and used National Car set D182, for PFE Class R-40-14 cars. This yielded the color UP emblems and the words, “ventilated refrigerator.”

For placement of this lettering, it was essential to have on the bench Dick Harley’s superb exposition of PFE painting and lettering, found in the second half of the book, Southern Pacific Freight Car Painting and Lettering Guide (SPH&TS, 2016), by Dick Harley and me. I chose to letter this model in the 1947 paint scheme, likely applicable to the early cars rebuilt to Class R-30-24. It’s shown on page 136.

Here’s the decal application. Note also that the steel kick plate under the door is now black, as it should be on a wood-sheathed PFE car in this era.

Next I added trucks and couplers to the underframe (for which, see prior post, cited in first paragraph, above), which by now had been painted black. The couplers were my standard Kadee “whisker” type. For trucks, I consulted the PFE equipment diagram for this car class (you can click on the image to enlarge it, if you wish), with trucks listed at lower center: 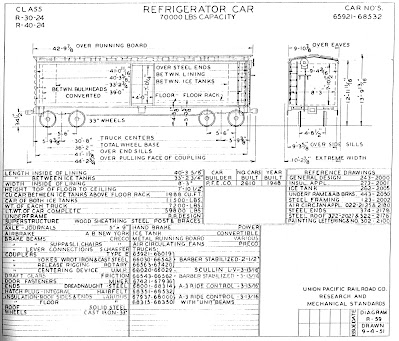 My car number, PFE 66240, clearly falls into the series 66030–66542, which received Barber S-2 trucks. There is a Tahoe Model Works truck of this kind, TMW 113, a pair of which I applied to this car. I did have to fabricate some thicker washers for the trucks to sit high enough for the couplers to be at correct height. At that point, I inserted the 30-ton underbody component into the car body, with canopy glue on all mating surfaces.

With the body now attached to the underbody, I was ready to continue adding body details. I will describe work on those aspects in a following post.