Operating on a fine N-scale layout

I had the good fortune last week to participate in an operating session on one of the area’s nicest N-scale layouts, Steve Van Meter's recreation of the early 1950s SP and WP in the Bay Area. With Steve’s permission, I want to show some indications of the quality of this layout. But first, one of those traditional overviews of much of the crew: 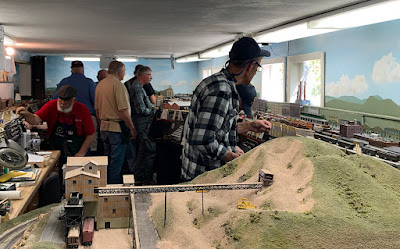 At right is John Sutkus, Oakland yardmaster, and at left, facing the camera, is Mike Stewart, Tracy yardmaster. Others in the distance are forming one of those often-seen congestion clumps at a busy part of the layout.

Around the layout, the backdrop skylines are all fairly indistinct, no details, which I personally think is a very nice way to keep attention on the foreground. Here is an example (the train happens to be the Tracy Turn I operated, returning to Oakland). 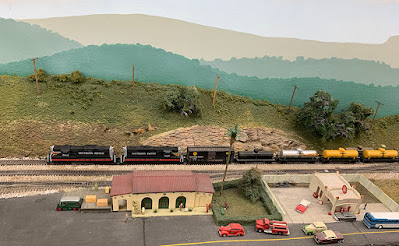 Steve has endeavored to reproduce the “feel” of the region and the era, while creating several nice switching areas and considerable mainline running. One of the well-done packing-house areas is shown below, containing altogether four packing houses, an interesting and time-consuming switching challenge. The packing houses are in the distance, the mainline is in the foreground. Both fruit trees, at left, and wine grapes, at right, are included here. 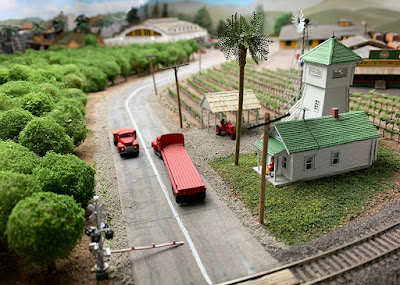 Another nice re-creation is the curved Del Monte canning plant (parts of which survive) in Alameda, shown here much like it was at one time. The nearby U.S. Steel distribution facility is below. This is the area served by the Alameda Belt Line. 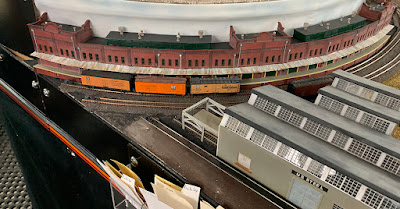 Another photo will show an example of the many nice touches that abound on the layout. This represents a loading facility for piggyback trailers, where a new installation has been made atop an older yard area. The asphalt paving, over the original brick pavement, has worn through in places. I thought this was really a nice representation of something rarely modeled. 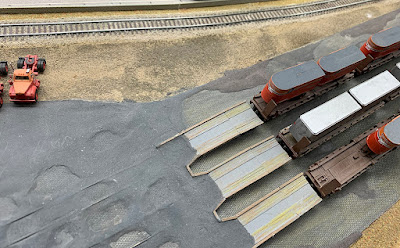 Of course, things can go wrong in operating sessions. Shown below is an example, with Clif Linton holding the throttle with which he has just stringlined an entire piggyback train. (I think the grin is embarrassment, not triumph.) No harm done, all cars were quickly re-railed. This is the kind of thing that makes layout owners pull their hair out (ask me how I know), but in reality are taken in stride by most operators, who, after all, have dealt with lots of problems before. 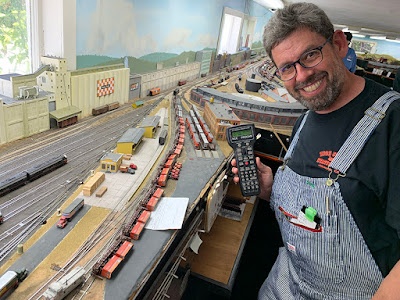 This was a very pleasant session, the first since the pandemic on this layout, even though some issues understandably arose — and were dealt with. Quite a nice layout, and fun to operate.