The Central Vermont in Northern California

Many people reading this blog have likely heard of this ambitious HO scale layout being built under Paul Weiss’s direction in Novato, California. I won’t try to provide a layout description, as there is a well-populated website available with ample information and many photos (that website is here: https://www.cvrailroad.com/ ).

In brief, the layout models the Central Vermont in 1956, the southern end of the railroad  between East New London, Connecticut, and Palmer, Massachusetts. Like many layouts, this one had a long pandemic layoff, but it came back to life last weekend with a large crew. As we all saw, layout building had actually advanced greatly during the pandemic, with many buildings added and much scenery moved forward.

I’ll just show a single example (there are many more on the site linked in the first paragraph above). One town along the CV is South Coventry, which had a classic brick depot (prototype photo below from the layout website, obviously a magazine or book spread). 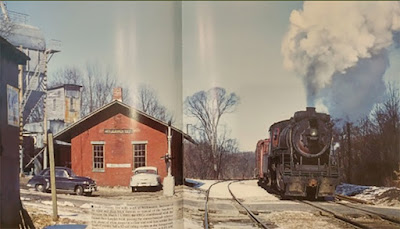 Here is the model version as it now appears, obviously a middle deck of three at this location on the layout. But it’s not modeled with snow on the ground <grin>.

An interesting aspect of the layout is that it is entirely built on a raised platform, permitting agent’s offices and the East New London yardmaster and clerk’s offices to be underneath, with a layout-floor-level window into the layout. My assignment was as that yardmaster. Below is a typical view from my office.

Perhaps this photo shows why I usually was up at layout level, supervising yard work where I could see it. But the space had its use. Note the signal control at left in the photo. This controls the yard entrance signal 25 feet away at the yard limit, and the small video screen above it is a live feed of the area right at the signal, so the yardmaster has an idea which train is there. 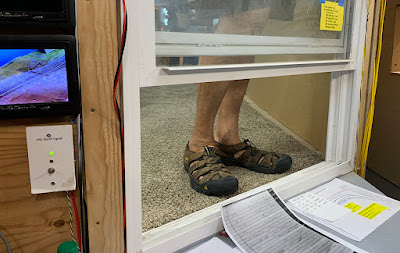 But don’t surmise that I think this “low office” idea is bad. Far from it. For the agents, it really is ideal. They get adequate space to work, use telephones, and hand up orders, without intruding into the layout space itself. Here is one example (Paul Weiss photo), with Dan Obermeyer in the chair at Montville. 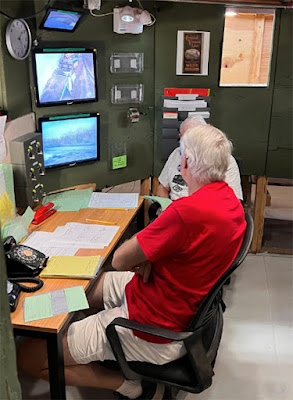 Finally, I should show the large East New London yard I was supervising. The nearest person is Ray Lorber, switchman, and beyond him is yard foreman Andy Schnur, who did a great job getting all the work done on schedule. 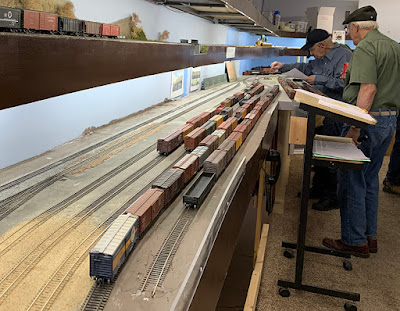 I guess I should conclude with a photo of the man himself, Paul Weiss, who has not only done a superb job in building the layout and inspiring and supervising his many co-workers, but having the vision of what the layout could be, and the drive to make it happen. 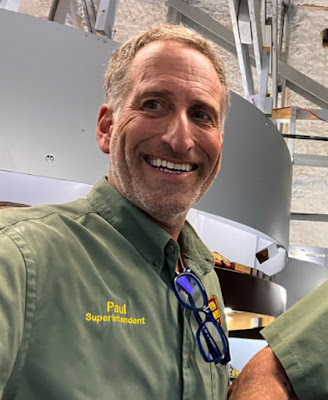 Thanks again, Paul, for the superb layout (work in progress though it is) and for this excellent operating session.