Railroad passenger excursions were fairly common in the 19th century, and continued throughout much of the 20th century, usually for seasonal events, conventions or holidays. But in the late 1930s, there emerged the concept of the “railfan excursion,” as we might term them in hindsight. This usually involved some sort of railroad enthusiasts club, sometimes just as a social outing, but in later days, often for the chance to ride behind steam, or to see a little-used part of a railroad.

Southern Pacific was no exception, and the Coast Division, which I model, was certainly no stranger to excursions. In the 1920s, many were for political conventions, but annual Stanford-California “Big Game” specials operated in multiple sections, as did the trains for many conventions of the Masonic “Mystic Shrine.” (For more, see John Signor’s book, Southern Pacific’s Coast Line, Signature Press, 1994.) Even the Boy Scout Jamboree of July 1953 at Irvine saw special trains operated down the coast.

To show just a single example, on October 10, 1937, the new Pacific Coast Chapter of the Railway & Locomotive Historical Society sponsored a trip from both San Francisco and Los Angeles to San Luis Obispo. The late Guy L. Dunscomb was kind enough to share his recollections of the trip with me, and supplied two of his photos. This first shot shows the crowd arriving at the roundhouse, with two GS-2 locomotives spotted (note men on top of both tenders, and people walking everywhere). You can click on the image to enlarge it if you wish.

Another shot, I think from atop a tender on the garden tracks, shows the excursion milling around the roundhouse area, women and boys mixed with the men, in a scene which must have made a few railroad officials feel faint (certainly an unimaginable scene today) 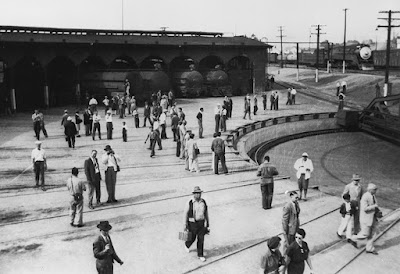 The real purpose of this excursion was to ride on the Pacific Coast narrow gauge. That railroad was on its last legs, but had some passenger equipment still in service for this event (below is an R.J. Berry photo, supplied by Allan Youell). The excursion is shown here passing behind the SP roundhouse, powered by PC 2-8-0 no. 106.

Behind the three coaches and a combine were two bench-filled gondolas, a caboose, and an old Santa Maria electric car. (For a full account of how this trip was organized by Gilbert H. Kneiss, chapter chairman, and G.M. Best, vice-chair, see Gerry Best’s book, The Pacific Coast Company, Signature Press reprint of the original 1964 Howell-North edition, 1997). 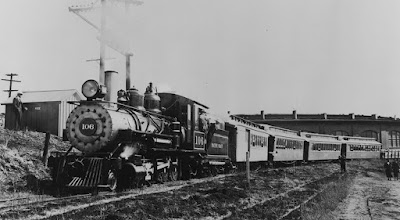 The three coaches were soon after sold to the White Pass & Yukon Railroad in Alaska, where they were all refurbished and retained in service. When a similar Pacific Coast excursion took place in October 1940, the crowd had to be accommodated with five gondolas and the combine.

The point I want to make here is that an excursion like the ones I’ve described is a potential layout operating event. It could certainly be mounted even on a branch line like my layout’s Santa Rosalia Branch (such excursions did take place on branches in the 1950s). Regular branchline passenger service would be long gone by my modeling year of 1953, but this is a way to operate passenger equipment on the branch.

How might that be arranged? A small passenger locomotive, for example my SP Ten-Wheeler, would be plenty of power. A trip like this might require two coaches. It would also be fun to make up a gondola or two with benches, and filled with passengers, but SP, unlike the Pacific Coast, did have ample passenger equipment, so probably bench gondolas are ruled out.

Here’s a possible example, Extra 2344 arriving at the Ballard depot with Ken Kidder brass car SP 1420 masquerading as a Class 60-C-4 coach. Since there are no turning facilities on the branch, the power would have to run around the train at Santa Rosalia, but that’s do-able. 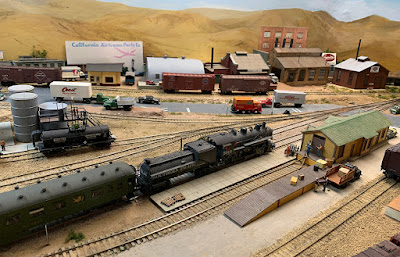 I haven’t yet included an excursion like this in an operating session on the present layout, but expect to do so in a forthcoming session.

Posted by Tony Thompson at 8:04 AM