Some time ago, I decided that my layout operations could benefit by using a fast clock, because that would open the door for effective use of a timetable based on the Southern Pacific prototype, during operating sessions. My ruminations on that topic were summarized in a post about five years ago (you can see it at: https://modelingthesp.blogspot.com/2017/12/fast-clocks.html ).

In the post just cited, I mentioned that I liked the features of the GML Enterprises system, and some months later, did indeed go ahead and purchase that set-up for a fast clock. That too was described in a follow-up post (here is a link: https://modelingthesp.blogspot.com/2018/05/fast-clocks-part-2.html ). Here’s how the main clock looks in place: 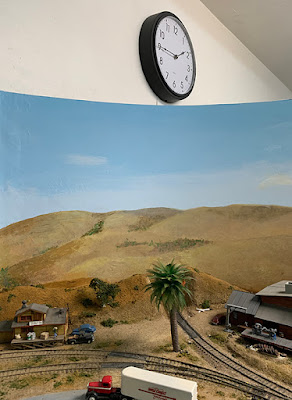 Since that time, layout operating sessions have worked well with the clock at a 1:1 time ratio (ordinary time rate). I did experiment with a 2:1 ratio, but for a switching-dominated layout like mine, it really was best to use 1:1. The first session with the new clock was described in a post (you can read it here: https://modelingthesp.blogspot.com/2018/05/an-operating-session-with-clock-and.html ).

Then came the pandemic. Like practically all layout owner, I didn’t host operating sessions for almost two years, except for my granddaughter. The clock was operated occasionally, but not often. Then in preparation for my operating session in June, the clock wouldn’t run. Voltage was not getting to the clock unit from the clock control panel.

I naturally thought first about contacting the maker, but the GML company (named for its principal, Gene M. Lewis), is out of business; Mr. Lewis has passed away. I’ve tried trouble-shooting the controls and wiring, but nothing has worked. I am evidently out of luck, not being an electronics person who could dig into the circuit boards to find a fault.

Of course, now that I know that my preferred clock rate is 1:1, I don’t really need a “controllable” clock, but can replace the GML with any regular clock. And they can be found at almost any hardware store, often for prices in the $20 range. So I went out and bought one, shown below as it comes from the store. Most clocks are packaged this way, so you can clearly see what you would get. I chose a fairly classical look for my 1953 layout. 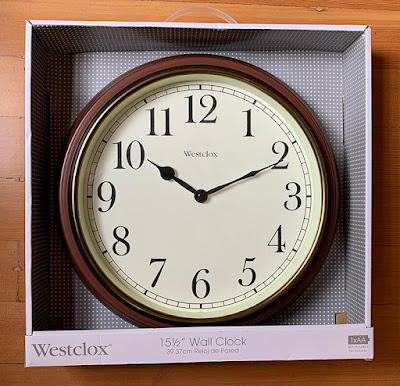 The idea for using such a clock is to take the battery out of the clock until needed for an op session. Then in preparation for a session, take down the clock, and set for the desired time of day to start the session. As soon as the session begins, inset battery and re-hang clock. I will be trying that process in an upcoming session, likely in September.

So with a chance to choose a new clock location, I thought it ought to be somewhat toward the Shumala side of the layout (it’s mostly used by the crew working on that side), but still visible on both sides. Here is how it looks when in place (already set for one of the starting times I use). 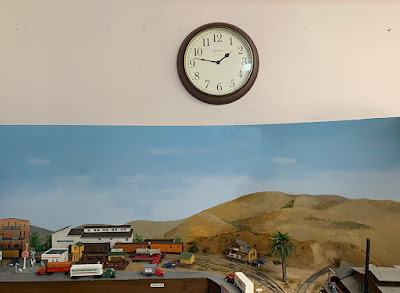 I suppose there’s no “moral” to this story, except that you may not need a variable-speed clock if you know you want to operate at 1:1, as I do. And plain clocks like the one I bought are inexpensive and easy to use.